The Bulgarian air force on 18 December held a ceremony to mark the retirement of its last Mikoyan MiG-21 fighters.

Involving the nation's last three serviceable examples – two single-seat MiG-21bis's and a two-seat MiG-21UM1 trainer – the event marked the end of regular flight operations, although the former pair will remain available to conduct quick reaction alert sorties until 31 December. The fighters will then be kept in storage at Graf Ignatievo air base, ready to be returned to airworthy status should the need arise. 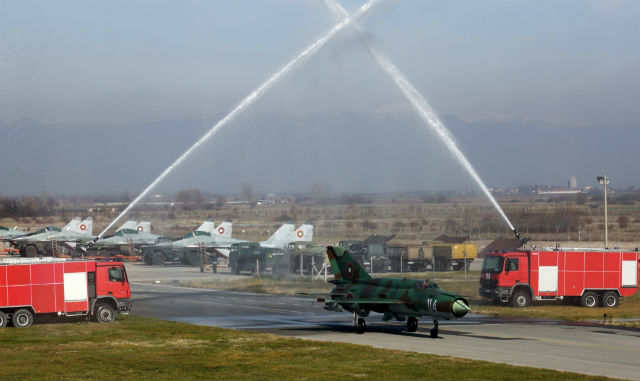 Bulgaria's MiG-21 fleet had originally been slated for retirement in 2012, but the type's availability was continued through two life-extension efforts. This was deemed necessary due to airworthiness problems experienced by the air force's Mikoyan MiG-29 fleet.

A potential further extension of the remaining MiG-21s has been rejected due to the cost of overhauling the aircraft, which were manufactured in 1981 and 1982. Instead, the air force has opted to direct its efforts and available funds towards maintaining its struggling MiG-29 fleet.

Meanwhile, the service is awaiting the formal go-ahead for a new fighter procurement. Sofia has been looking at an affordable Western type as a replacement for its fighters and its Sukhoi Su-25 ground-attack aircraft.

Bulgarian operations with the MiG-21 spanned 52 years, with 226 examples in 10 variants fielded between 1963 and 1990, including 86 secondhand jets. Attrition totalled 42 aircraft and 25 pilots lost in training accidents or ground fires between 1966 and 2003.