Airbus Defence & Space has moved a step closer to delivering an A330 multirole tanker transport to the French air force, after flying its first example on 7 September. 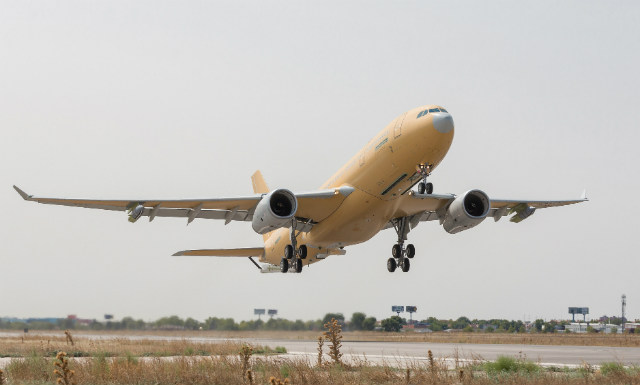 France will take delivery of nine A330s – to be named the Phénix in its air force service – from 2018, although Airbus notes that "another three are expected to be confirmed".

"The Phénix fleet will be equipped with a combination of the Airbus aerial refuelling boom system and underwing hose-and-drogue refuelling pods, and can carry 272 passengers or be configured for medical evacuation," the company says.

The French tanker/transport is the second A330 MRTT to have been flown in an enhanced production standard featuring "structural modifications, aerodynamic improvements giving a fuel-burn reduction of up to 1%, upgraded avionics computers and enhanced military systems". A lead example – produced for the Republic of Singapore Air Force – made its debut sortie from Getafe on 30 September 2016.

A combined total of 28 A330 MRTTs have been delivered to date, with the type in service with the air forces of Australia, Saudi Arabia, the United Arab Emirates and the UK. Airbus says a further 23 are on order, including those jets for France and Singapore. A coalition of NATO partners Germany, Luxembourg, the Netherlands and Norway will also acquire the type, which Qatar and South Korea have also previously selected.