One model represents KAI’s in-house proposal for the programme, while the other represents the ambitions of Seoul’s Agency for Defense Development (ADD).

KAI’s proposal is for a single-engined aircraft based largely on systems developed for the country’s T-50 advanced jet trainer. The company feels that this approach would be more cost effective and draw from its experience with the T-50, which had extensive design input from Lockheed Martin. 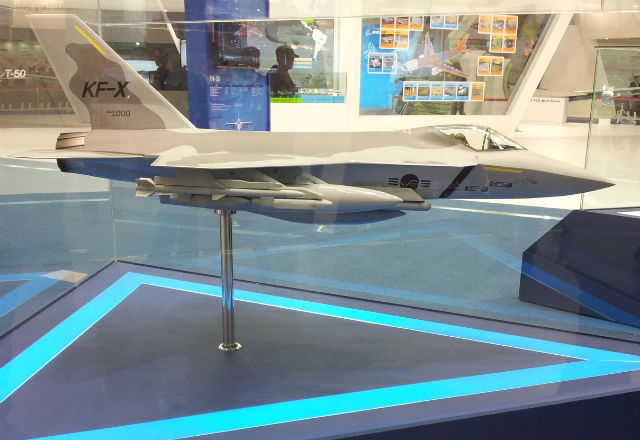 The ADD concept is a twin-engined design and would involve considerably more indigenously-developed content.

Both appear to recognise the challenges involved in building a true stealth aircraft. While each bears a passing resemblance to the low observable Lockheed Martin F-35, particularly in regard to the shaping of the intakes and forward fuselage, neither possesses internal weapons bays.

KAI did not state the powerplant for either aircraft, but one source says that it is likely to require similar power to the Pratt & Whitney F100 or General Electric F110, the engines for the F-16 fighter. 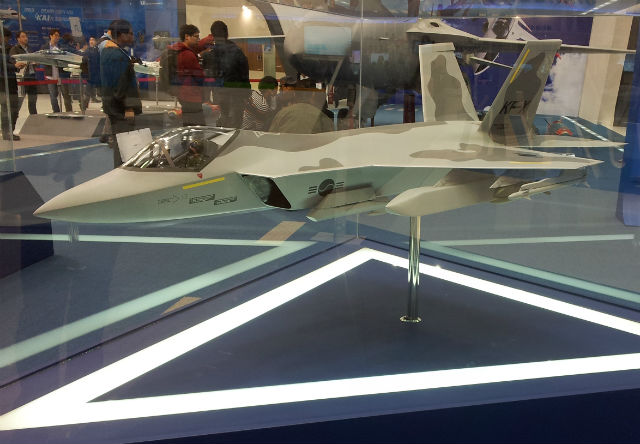 Industry sources at the show say that KAI has been actively seeking information on a range of equipment that the KFX would need to be a truly capable fighter jet, including its radar, avionics, mission computers, and other systems.

Although this is the first time KAI has displayed such detailed models at the Seoul show, there is still a great deal of uncertainty about the programme.

To a large degree, Seoul is relying on technology transfer stemming from its F-X III acquisition for 60 fighters to develop indigenous manufacturing capabilities for KFX. Given that F-X III is in limbo following Seoul’s decision to re-tender the competition rather than obtain the Boeing F-15 Silent Eagle over the F-35 and Eurofighter Typhoon, any decision on KFX is effectively stalled as well.

Another challenge for the KFX programme is the presence of Indonesia in the effort as a 20% partner. While Jakarta is generally an ally of the West, the US government could be dubious about providing advanced technologies to Jakarta through the KFX programme, which will invariably require a large degree of foreign content.

In the event that Seoul decides to move forward with the programme, the Korean air force is likely to obtain 120 examples, with Jakarta to take 80. KAI also hopes to win other export orders for the aircraft.