The images were reportedly taken at the Shenyang Aircraft Corporation airfield and appeared over the weekend of 15-16 September 2012.

A possible designation for the aircraft is J-21. Chinese defence sites, however, variously give the designation as the J-21, J-31 or F-60. In the absence of an official announcement, it is difficult ascertain the new aircraft's official designation.

As with the F-22 and F-35, the J-21 features canted twin tails, a key design feature of low observable aircraft. A single grainy head-on shot shows widely-spaced intakes, similar in appearance to the F-35.

One clear difference from the F-35 is the presence of two engines. Chinese observers speculate that these are Klimov RD-93s, the powerplant used in the Chengdu/Pakistan Aeronautical Complex JF-17 fighter. 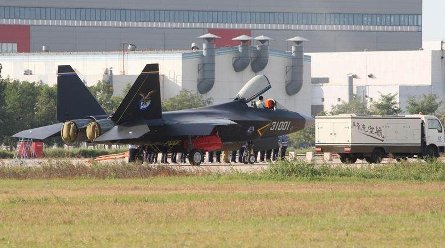 The aircraft also lacks the thrust-vectoring nozzles found on the F-22. No accommodation appears to exist for short take off vertical landing (STOVL) capability.

Based on the J-21's relative size compared with a truck parked nearby in one of the pictures, the aircraft is considerably smaller than the Chengdu J-20, photos of which emerged in similar fashion in late 2010.

There are two other key differences. The J-20 has large canards, which experts have said are not in keeping with a low observable radar cross section. Instead of canards, the J-21 has a tail plane similar to that of the F-22 and F-35. 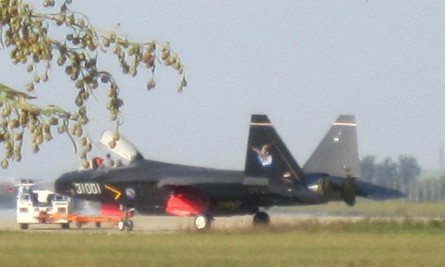 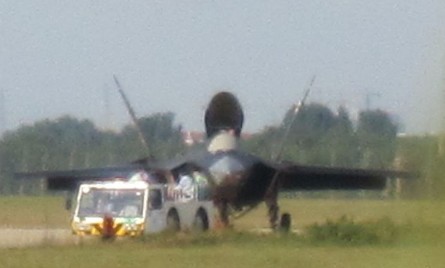 While China has no operational aircraft carriers, it has been conducting sea trials with the Varyag, a former Soviet flat-top.

Based on early images, the J-21 would appear to be a more nimble aircraft than the J-20, suggesting it is optimised for the air superiority mission. Some experts have suggested that the large J-20 is not intended as a fighter, but as a long-range attack aircraft.

The emergence of the pictures coincides with protests in Chinese cities over a territorial dispute with Japan over a group of uninhabited islands in the East China Sea. US defence secretary Leon Panetta will also visit China this week. The first flight of the J-20 took place on 11 January 2011, during a visit to China by Panetta's predecessor, Robert Gates.