No one would blame you for thinking SkyWest Airlines' newest regional jet is a run-of-the-mill Embraer 175.

It looks exactly like an E175 from the outside.

But the newest addition to SkyWest's fleet is actually Embraer's newly-designated E175-SC, a "special configuration" derivative of the E175 that carries 70 seats, not the typical load of 76.

SkyWest announced 13 March that it received its first E175-SC, an aircraft with registration N262SY. The regional carrier, a unit of St George, Utah-based SkyWest Inc, has orders for 14 more of the type.

SkyWest tweeted pictures of its newest aircraft, an E175-SC, on 13 March 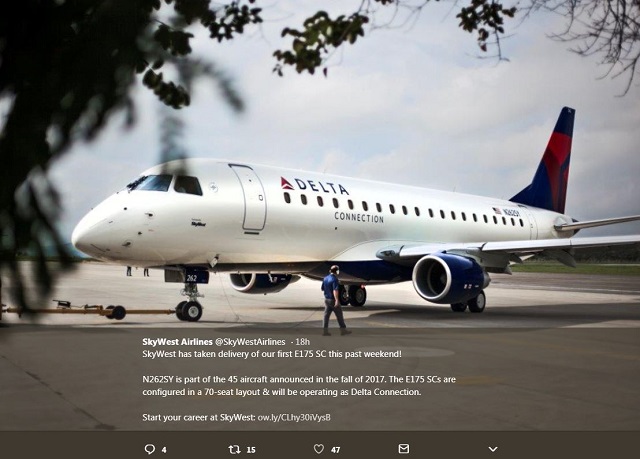 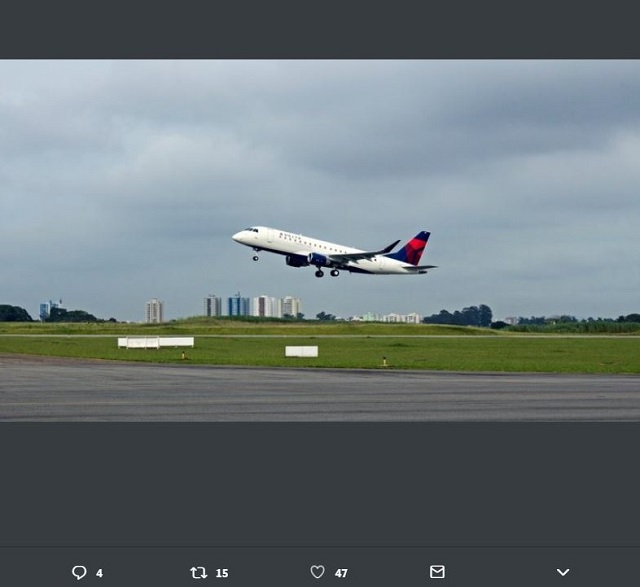 "The E175-SCs are configured in a 70-seat layout [and] will be operating as Delta Connection," SkyWest tweeted.

The SkyWest aircraft is also the first E175-SC delivered by Embraer to any airline, and SkyWest is the only customer, Embraer says.

"Embraer is in discussions with other airlines about the E175-SC," it adds.

Embraer unveiled the E175-SC in September 2017 when it announced SkyWest ordered 15 of the type.

The Brazilian manufacturer developed the derivative because it largely stopped producing its dedicated 70-seat aircraft, the E170, Embraer's head of North American sales and marketing Charlie Hillis said at the time.

Embraer is also not carrying the E170 forward into its newest iteration of the lineup, the E-Jet E2 family.

Many 70-seat aircraft in the fleets of US regional carriers are coming close to retirement and will soon need to be replaced, Hillis said.

"The biggest opportunity, we believe, is the 70-seat market. There are over 300 70-seaters in the market in North America today," Hillis said in September. "Many of those are old and need to be replaced. We have the perfect tool for that."

US airlines cannot simply replace 70-seat aircraft with larger 76-seaters like the E175 due to so-called "scope clause" restrictions in contracts between major US airlines and their pilots, he noted.

Those contracts consider 70-seat aircraft and 76-seat aircraft to be distinct categories, and set limits on the number of aircraft in each category that regional carriers can operate for mainline partners.

Carriers can modify E175-SCs into 76-seat aircraft, but they must purchase a service bulletin from Embraer to do so, Hillis said.

US regional carriers operate 324 aircraft in the 70-seat category, including 264 CRJ700s and 60 E170s, according to Flight Fleets Analyzer.

Mitsubishi Aircraft is also targeting the 70-seat aircraft market with its in-development MRJ70. The company has said it expects to deliver the first of that type in 2021.