Story updated on 12 December to include correct runway information.

New details about the 13 March crash of a US Airways Airbus A320 at Philadelphia reveal the accident was preceded by series of pilot failures and may have been more serious than a blown tyre, which was initially reported as the cause.

Internal Federal Aviation Administration documents obtained by Flightglobal show that prior to take-off the crew failed to enter into the flight computer data it needed to calculate power settings.

They also continued the take-off roll amid audible warnings urging them to pull back the throttles. In response to those warnings, the captain said, “We’ll get that straight when we get airborne,” say the documents, which include an FAA accident report and copies of notes taken by FAA inspectors dispatched the scene.

The documents also say the captain flew too soon after taking prescription medications.

The US Airways A320, registration N113UW, crashed at Philadelphia International airport at 18:35 local time as it took off for Fort Lauderdale. 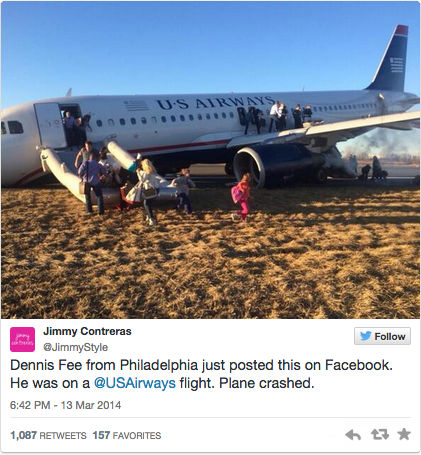 All 149 passengers and five crew exited the aircraft via emergency exits. Although no serious injuries were reported initially, one passenger recently filed a lawsuit against US Airways and parent company American Airlines Group, seeking damages for a shoulder injury suffered from using the emergency slides.

In the hours following the accident, US Airways told media outlets that initial reports indicated a blown tyre led the pilots to abort the take-off.

But newly-obtained documents trace the accident to failures made by the pilots during taxiing, and reveal the tyre blew after the captain aborted the take-off just after the aircraft became airborne.

The documents say that, prior to take-off, captain John Powell noticed the aircraft’s primary flight display wrongly indicated 27R as the departure runway.

Co-pilot Lynda Fleming then correctly inputted 27L into the multifunction control display unit, but did not enter take-off V-speeds or a “flex temperature”, which allows the aircraft to take-off at lower-than-maximum thrust. The computer needed those values to calculate takeoff power, and required their re-entry after a runway change.

“The crew failed to accomplish this step and so the aircraft had no data available to compute and perform a flex take-off or display speeds,” say the FAA documents.

As a result, when the captain advanced the throttles for takeoff, a warning chime sounded and a screen displayed “ENG THR LEVERS NOT SET; SET TOGA”, an instruction to set the throttles to take-off/go-around” power.

The copilot, who had 4,784h in A320s, read the first part of this message aloud, but not the instruction to increase power, the report says. The captain, who had 4,457h of A320 time, responded that “the power is set”, adding that he had advanced the throttles to the flex position.

Meanwhile, the aircraft accelerated along runway 27L into a 19kt headwind.

When it reached 80kt, an audible warning sounded “retard, retard, retard”, instructing the pilots to idle the throttles, the FAA report says. The first officer told the captain she had never heard that warning during take-off. “We’ll get that straight when we get airborne,” the captain responded.

The documents give varying indications of how high the aircraft climbed; one inspector says 20ft, another 70ft. Regardless, shortly after take-off the captain aborted.

“The captain indicates that, once the wheels were off the ground, he had the perception that the aircraft was unsafe to fly, and moved the throttle to the idle position, which resulted in the accident,” the documents say.

Inspectors initially found no weight and balance issues with the aircraft, and the flight-data recorder showed no anomalies. However, FAA officials have suggested that gusty, shifting winds could also have played a role, according to local media reports.

Surveillance video reviewed by inspectors showed that, shortly after take-off, the aircraft’s nose dropped and it began to sink. The nose then pitched up and, still sinking, the A320's tail struck the runway, followed by the main gear. The nose gear impacted last.

“Aircraft tail struck the runway, driving the nose landing gear into the runway, causing the [gear] tyres to blow and the [gear] to collapse,” say FAA documents. The rear pressure bulkhead was also damaged.

The aircraft slid 2,000ft (610m) along the runway, stopping on the runway’s left edge, the report says. US Airways declared the aircraft a complete loss with its insurance company.

The FAA’s report also notes that the captain reported for duty that day 45h after taking two prescription medications: midazolam, a sedating drug, and fentanyl, a narcotic used as part of medical procedures.

He took the medications for a stress test performed on 11 March, but did not notify US Airways, says the FAA. It notes that pilots should not fly, after taking the last dose of such medications, for a period equal to five times the medications’ half-life. That period was 60 hours for the captain, the FAA says.