Comac has ramped up production of its ARJ21 regional jet after opening a second production line at Shanghai’s Pudong International airport.

The new production line is located at the Comac final assembly centre in Pudong, the same facility where C919 is assembled.

Plans for the second production line were first disclosed last year. The ARJ21 is currently assembled at the Shanghai Aircraft Manufacturing facility in Changzhong Road.

The Pudong line is able to assemble up to 30 aircraft a year, double the capacity of the Changzhong Road facility.

Comac adds that work at the Pudong production line gradually accelerated since last year, to include processes such as component assembly, final assembly and painting.

On 6 March, aircraft 132 — the first aircraft assembled at Pudong — took off on its maiden production test flight. 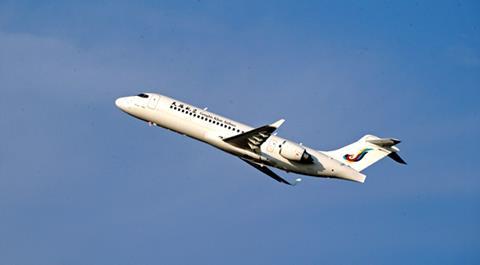 Aircraft 132, which wore the colours of Genghis Khan Airlines, takes off on its test flight.

Comac states the aircraft, which wore the livery of Genghis Khan Airlines, flew for three hours and 50 minutes.

In total, there are 27 ARJ21s in operation in China. Comac has another 330 aircraft in its order book.