Keeping AWACS at the heart of NATO

In what is a remarkable 12 months for aerospace-sector anniversaries – ranging from half-centuries since the first flights of the Boeing 747 and Aerospatiale/BAC Concorde, man’s inaugural steps on the moon and the formation of both Airbus and Embraer, to Flight’s own 110th year – one of the most influential events could be overlooked all too easily. But in the context of advancing global security, few steps can rival the significance of NATO’s establishment in April 1949 via the North Atlantic Treaty.

An initial 12 nations held membership when the Alliance was created as a means of jointly countering the might of the Soviet Union. Highlighting how Europe changed over the ensuing decades, an initially gradual process of enlargement, which added only seven more countries through the organisation’s first 50 years, accelerated markedly from 2004.

The last 15 years have seen a further 10 additions, for a current total of 29, and NATO’s operational reach now runs down from the Baltic states and through the Balkans and Black Sea, providing a broad eastern flank facing an unpredictable Russia.

North Macedonia is to gain full membership during 2020, and NATO is inviting “any other European state in a position to further the principles of this Treaty and to contribute to the security of the North Atlantic area”. Others to have expressed interest in joining are Bosnia and Herzegovina, Georgia and Ukraine.

Today, NATO’s most prominent example of shared endeavour is arguably the Alliance’s own fleet of Boeing E-3A airborne warning and control system (AWACS) aircraft. Operating from Geilenkirchen air base in Germany, this totals 14 Boeing 707-based surveillance platforms, immediately recognisable due to the large radar installed atop the type’s fuselage. 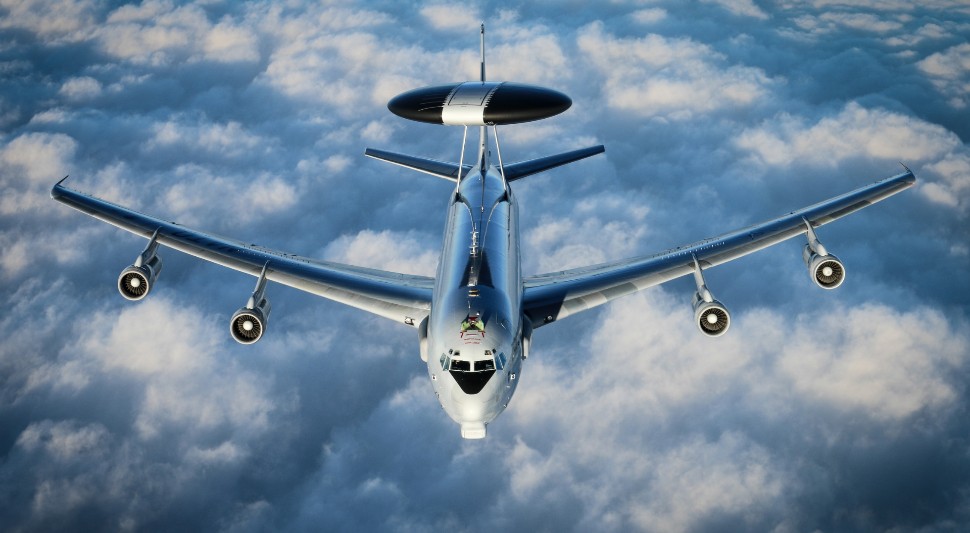 Employed for airborne early warning and control duties, along with battlefield management tasks, the E-3A is typically flown with a 15-strong crew, including pilots, technicians and mission system operators. For long-­endurance duties supported by in-flight refuelling, it can accommodate up to 33 personnel.

Directly supported by contributions from 17 nations, the NATO force also calls on the UK’s national fleet of E-3Ds, with the Royal Air Force assets providing around 25% of its total capability. London recently ordered five replacement 737-based E-7As with Northrop Grumman MESA surveillance radars, with operations to commence by the mid-2020s.

Cirium’s Fleets Analyzer shows NATO’s E-3As as aged between 34 and 38 years. In late 2018, a Boeing-led mid-life upgrade activity was completed, focused on bringing them in line with current communication, navigation and surveillance/air traffic management (CNS/ATM) requirements. 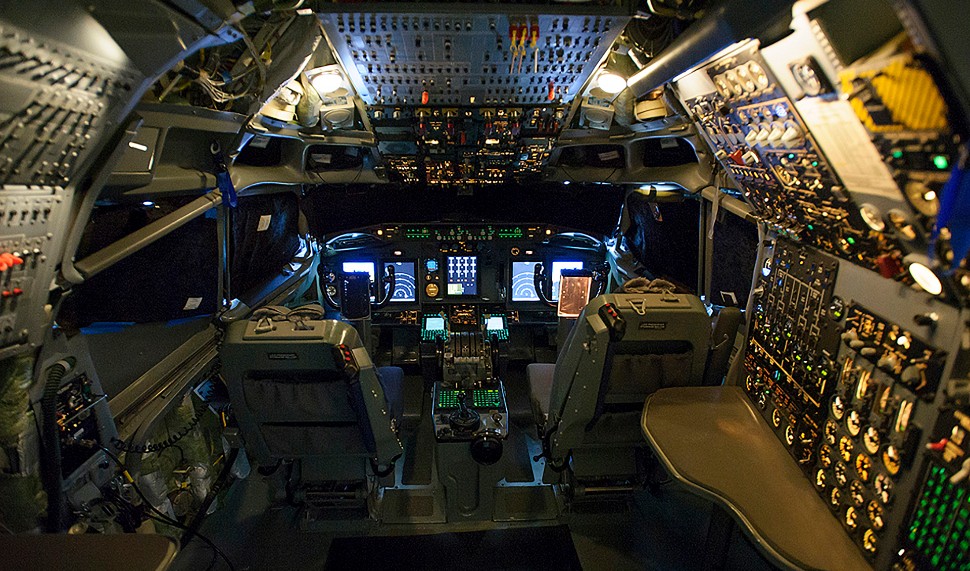 In the cockpit, analogue displays have been replaced with five multifunctional digital units, capable of showing “customisable ­engine, navigation and radar data”, Boeing says of the update. The company upgraded a first example in the USA, before returning it for service in November 2016. Airbus Defence & Space replicated the work on the remainder of the fleet at its Manching site near Munich, handing over the final aircraft last December.

Due to the reliability improvements expected, a decision was taken to retire a further three E-3As between late 2015 and the end of last year.

Boeing says that with the modernisation activity completed, the 14 retained aircraft “can execute their vital missions for years to come”. According to current plans, the Alliance will continue to fly the type until 2035, representing an expected service life greater than 50 years.

Ahead of the Paris air show, FlightGlobal paid a visit to the Stolberg facility of training specialist CAE, which supports the instruction of NATO force personnel approximately 18 miles (29km) to the north at Geilenkirchen. The company’s operational relationship with the Alliance dates back some 35 years on the platform.

“It is the only operational fleet that NATO is operating itself – it’s not full of earmarked forces that are operating up to a certain event: it is there and present every day,” says Jens Hoffmann, CAE’s system manager for its E-3A simulator, and a former rear-crew member.

“NATO gave us the opportunity to build a full-flight simulator [FFS] back in the late 1970s to be implemented in 1982,” Hoffmann says. To date, the equivalent of more than 120,000 flight hours have been accumulated using the device.

To keep pace with the major CNS/ATM update, CAE was contracted to modernise the fleet’s training infrastructure in 2014. This involved bringing the FFS and an associated flight training device to the Level D and Level II operating standards, respectively.

“NATO decided that it would qualify both simulators up to the highest level,” Hoffmann says. The benefits of having done so are already apparent, he adds, describing the updated capability as representing “a perfectly managed system”.

Building on its long experience, CAE was also contracted to provide wider training services at the Geilenkirchen site in 2017. “We’re not only the technical solution provider, responsible for maintaining and updating [the simulators],” Hoffmann says. The company now has two teams on the base, comprising 10 maintainers for the synthetic devices, plus 18 operators “throughout the entire variety of the positions that are flying on NATO AWACS”. These include two instructor pilots, a pair of instructor flight engineers, and a communication and navigation system specialist. “We are covering most of the positions at the back end – either as an operator in the [Boeing-supplied] mission simulator, or as instructors,” he notes.

CAE also provides console familiarisation, aircrew instructor – or “train the trainer” – courses, and crew resource management and continuation training. In total, the company supports the instruction of more than 400 personnel per year.

“NATO AWACS has become more and more a schoolhouse for lots of nations, so instead of sending the combat-ready people to the component, they have sent new people,” Hoffmann notes. As a result, the company has also prepared an aircrew tactical procedure course, “to make each and every aviator familiar” with its operational requirements.

With many years of operational use to come, CAE is investigating potential further updates for its training system, and the possibility of including an upgraded visual system for the FFS.

“We are looking to the future – there are still lots of needs on the customer side, and they would like to go on that path with us,” Hoffmann says. “We have our bits and bytes together, and have solutions on hand.”

An ever-present asset during coalition operations, the E-3A fleet has since October 2016 supported the multinational campaign against the Islamic State group in the Middle East, with aircraft forward-deployed to Konya air base in Turkey. “AWACS can detect aircraft hundreds of kilometres away, so they can monitor airspace in Iraq and Syria from inside Turkey,” NATO notes, while also stressing that its crews are not being employed to control combat aircraft or coordinate air strikes.

As it celebrates its 70th anniversary, the Alliance must resolve issues including the sustained tension between Turkey and the USA caused by Ankara’s acquisition of both the Lockheed Martin F-35 and Russian-produced Almaz-Antey S-400 long-range air-defence system. Also likely to be on the agenda at a NATO summit in London in December will be fresh calls for more member states to work towards committing 2% of their GDP to defence spending to further bolster its collective strength.

Whatever challenges may lie ahead for the Alliance, its leaders can rely on the AWACS force for at least another 15 years, during which time member states will have to launch plans to replace its venerable E-3As. The ­opportunity to provide such a flagship surveillance capability will doubtless prompt keen competition. ■