With four operational Airbus A400Ms in use, the UK Royal Air Force is working overtime to “unlock” the potential of the service's new tactical transport, with one aircraft now in the USA to assess carriage of the US Army's Stryker armoured fighting vehicle.

The A400M from RAF Brize Norton, in Oxfordshire, has deployed to Fort Bliss in Texas to participate in a 27 September “network integration evaluation exercise”, and will conduct checks with the armoured Stryker, as well as other heavy military equipment. 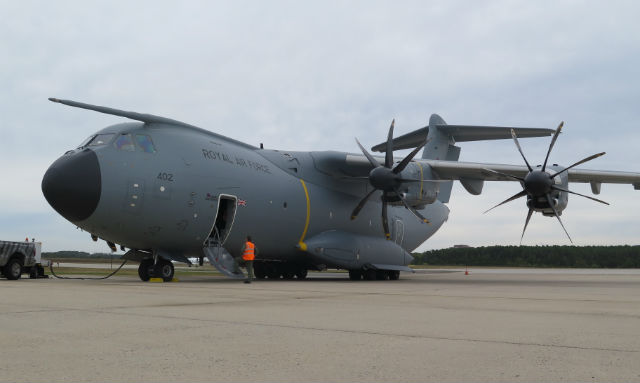 During a brief stop-off in Washington DC, the RAF's officer commanding 70 Sqn, Wg Cdr Simon Boyle, told Flightglobal that the first four aircraft are currently capable of deploying to prepared airstrips in “benign” operating environments. The challenge now, he says, is to grow the aircraft’s capability with the goal of fully tactical operations, including night operations, from rough and unprepared airstrips, in 2017.

The A400M is a "pleasure to fly", thanks in-part to its Airbus A380-based flight controls, Boyle says, but transporting combat vehicles, helicopters and paratroops into a war zone demands a more mature airlift system. Those improved capabilities are slowly being unlocked, as new systems and software loads are installed and aircrews gain experience.

“Our experience with the aircraft is limited at the moment,” Boyle says. “We’re very much in the development phase with the RAF and the programme in general, in terms of how we’re working with Airbus Defence & Space to unlock what are going to be the very considerable capabilities of the aircraft. It’s very much an incremental process.”

Of the 22 A400Ms being delivered up to 2018, the first four RAF aircraft are operating as an interim strategic air transport capability. Three more are currently with the manufacturer in Spain, receiving their defensive aids sub-system (DASS) equipment which includes defensive flares, radar warning receivers and infrared missile countermeasures.

“Incrementally, over the coming months and years, we’ll move from the strategic air transport aircraft it is now into the tactical airlifter that it’s supposed to be,” starting with the DASS-equipped units in mid-2016, says Boyle. “In the mid-2017 timeframe, that’s when we really start unlocking the tactical capability A400M should offer us.

“In the early part of 2017, that’s when we should be able to deploy a limited number of aircraft and sustain them away from their home base. Then, toward the end of 2017, that’s when we’re starting the initial tactical roles, which we would define as low-level flight and delivery of personnel and stores, landing on rough and unprepared strips and so on.”

Through that period, the Atlas will cycle through hardware and software upgrades as it becomes a war-ready, tactical transport capable of airdropping personnel and equipment, including lights-out operations with night vision goggles in 2017. By 2022, the aircraft should be developed enough to replace the RAF's combat-proven Lockheed Martin C-130J, says Boyle, including for special operations use.

Boyle says the RAF's Atlas programme has not been overly delayed by the fatal A400M crash in Spain earlier this year, nor has it significantly changed its operating procedures.

The A400M is not currently scheduled to receive in-flight refuelling from the RAF’s Airbus A330 Voyager tanker-transport fleet because of its long range but the capability will be used later, if deemed necessary.