RAF TriStars to be scrapped after US sale falls through

Operations with the Royal Air Force’s Lockheed TriStar tanker/transports came to an end on 24 March, as one of the type delivered fuel to Eurofighter Typhoon and Panavia Tornado GR4 combat aircraft over the North Sea for the last time.

Accompanied by another KC1-standard aircraft carrying journalists, TriStar KC1 ZD948 made its last operational flight from Brize Norton in Oxfordshire 30 years after the adapted widebody airliner entered use with the RAF’s 216 Sqn.

Since its introduction in 1984, “The TriStar has been the mainstay moving personnel around the world, and providing air-to-air refuelling,” says Wg Cdr Pete Morgan, officer commanding 216 Sqn. Another of the type returned to Brize Norton late on 23 March, after completing a “trail” bringing several Typhoons back from the USA, he adds. 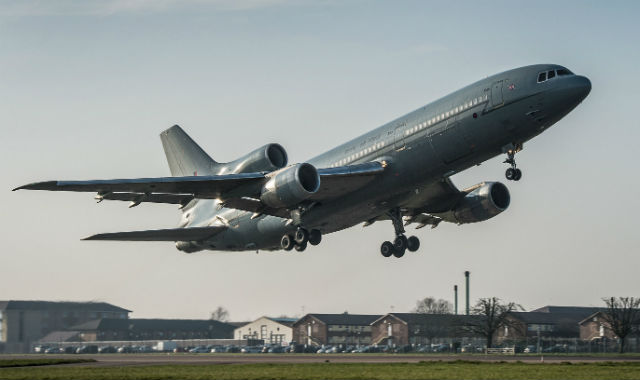 TriStars played a key role in sustaining the RAF’s “airbridge” with Afghanistan, and by the end of their service had made 1,642 flights into the country, and transferred around 250,000 passengers both into and out of the theatre of operations, Morgan says.

The RAF unit was formally disbanded on 20 March, and its final duty is expected to involve delivering the four remaining aircraft at Brize Norton to Bruntingthorpe in Leicestershire on 25 March.

Six L-1011-500s were acquired from British Airways and adapted as K1/KC1 tanker/transports by Marshall Aerospace, while three passenger C2s were sourced from Pan Am. One of the latter, ZE704, left use as the RAF’s TriStar “fleet leader”, with more than 58,000 flight hours logged since it was built in 1980.

Two aircraft – ZD949 and ZE706 – had already been withdrawn from use, and are at Marshall’s Cambridge airport site in non-flying condition. Another, ZD952, was flown to Kemble in Gloucestershire in early February.

Talks with a potential buyer for the last six operational aircraft had reached an advanced stage, but stalled over finance and export permissions. Two of these are already at Bruntingthorpe, and any further discussions over the fleet must be made between the US entrepreneur and the scrap merchant directly, says Morgan. “At the moment, they’re all to be scrapped,” he adds.

With the RAF also having retired its last Vickers VC10s last September, the Airbus A330 Voyagers of its 10 and 101 squadrons are now performing the tanker/transport mission.