Saab is to modify 60 Gripen C fighters to the enhanced E-model configuration for the Swedish air force, after Stockholm signed a series production agreement worth SKr16.4 billion ($2.5 billion). 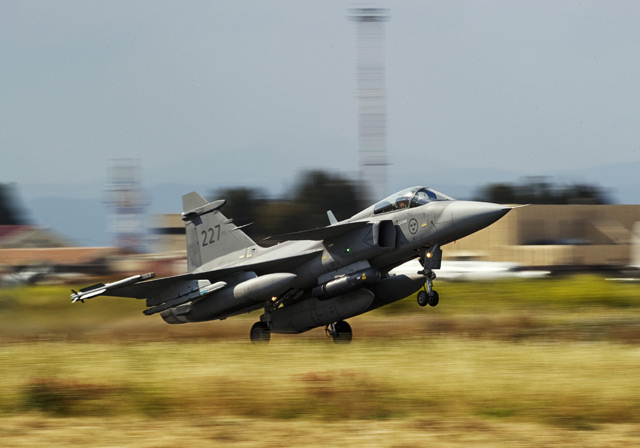 Announced on 18 December, the award from Sweden’s Defence Materiel Administration (FMV) will cover programme activities until 2026, with the first adapted Gripen Es to be returned to use in 2018. The order follows two separate deals signed earlier this year and worth a combined SKr13.2 billion, which are to cover development activities on the project through 2023.

Sweden’s fresh commitment to the new-generation fighter “is confirmation that the programme is proceeding according to plan", says Saab chief executive Håkan Buskhe. It also is a required step leading to the planned purchase of 22 Gripen Es by Switzerland. Saab expects to know by early 2014 whether the proposed Swiss acquisition will face a public referendum.

Once remanufactured, the Gripen E will feature new avionics, including an active electronically scanned array radar, increased weapons-carrying potential, supercruise operating performance and extended range. The FMV has also placed a contract worth around SKr186 million to support weapons integration activities for the new model, with this work to include the full integration of MBDA’s Meteor beyond-visual-range air-to-air missile.

“Our existing customers that operate the Gripen C/D version will also be able to take advantage of some of the development in their future upgrades,” says Lennart Sindahl, head of the company’s aeronautics business area. These include the Czech Republic, Hungary, South Africa and Thailand.

The Swedish air force currently operates an active fleet of 62 single-seat Gripen Cs and 18 D-model trainers, as recorded by Flightglobal’s MiliCAS database. These were delivered between 2002 and 2013, it says.