The Australian Transport Safety Bureau (ATSB) has discontinued a probe into a 2019 serious incident in which a Singapore Airlines Boeing 747-400F damaged an engine while landing at Sydney.

The aircraft (9V-SFO) was operating a service on the Singapore-Sydney route. On approach to runway 34L during the night of 28 November 2019, the crew encountered a crosswind and gusts – conditions on which they had been briefed. 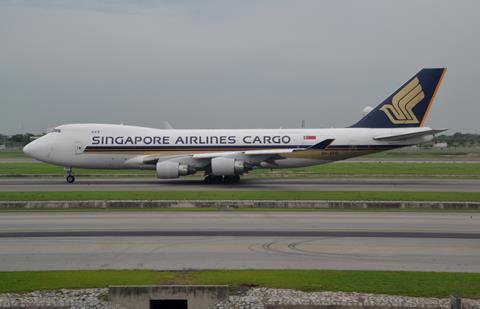 9V-SFO - the aircraft involved in the landing incident

“As the aircraft entered the flare it drifted right of centreline, followed by a sudden un-commanded roll to the left,” says ATSB.

“In response, the flight crew initiated a rejected landing manoeuvre, during which the number 1 engine pod struck the ground. After a second approach, the aircraft landed without further incident.”

Ultimately, the damage to engine number 1 – a Pratt & Whitney PW4000 - was significant enough to see it removed from service.

ATSB investigations revealed that both the crew and the aircraft responded correctly to the situation. Wake turbulence was determined not to be a factor.

The ATSB goes on, however, to note that wind shear below 1,000ft poses a “significant hazard.”

In the past, dedicated radar systems to detect wind shear at Sydney Airport had been explored, but the cost was deemed too high and the environmental cost prohibitive.

In 2020, however, Sydney Airport observed that the cost of light detection and ranging (LIDAR) systems have fallen considerably, making implementation of a dedicated wind shear detection capablity more viable.

A working group comprising Sydney Airport, the Bureau of Meteorology, Airservices Australia, airlines, and a pilot’s union has been formed to consider implementing the system.

“The trial proved the effectiveness of the system to enhance awareness of turbulence and low-level wind shear when it occurs, and the working group is now considering implementation issues. The ATSB strongly encourages the use of LIDAR systems at airports such as Sydney Airport where turbulence-related events have been known to occur.”