French investigators have detailed a Boeing 777-200ER crew’s botched landing attempt at Paris Le Bourget which resulted in a wing and horizontal stabiliser strike on the runway before the pilots executed a go-around.

Investigation authority BEA says the crew tried to correct the 777’s flightpath after it overshot a low-altitude turn to line with the runway, despite the inertia of the large twinjet making such a manoeuvre difficult. The approach was unstable, it says, and was aborted late.

The US-registered private aircraft (N777AS) was operated by Saudi-linked Mid East Jet, and had been arriving from Riyadh on 5 June 2016. 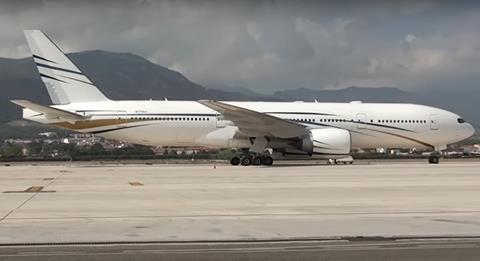 Pilots of the 777-200ER eventually executed a late go-around

It was conducting the LOC A approach to runway 25 which requires the aircraft to approach from the east on a heading of 276° – offset from the runway centreline by 26° – before turning slightly to the left to line up.

The crew disengaged the autopilot just before passing the minimum descent altitude of 800ft.

As the aircraft reached 300ft above airport level it was descending at 900ft/min and the crew retarded the thrust levers. It was proceeding on a heading of 275° at 1,100m from the threshold when the captain commenced the left turn for line-up.

BEA says the aircraft dipped to a slight nose-down attitude and, although the captain had made a pitch-up input, the crew received a ‘sink rate’ warning as its rate of descent increased to 1,200ft/min at 150ft.

As the captain increased the nose-up input and advanced the thrust levers the 777 overshot the turn for the runway centreline at 100ft while banked 19° to the left.

Rather than execute an immediate go-around the crew allowed the aircraft to fly alongside the right-hand edge of the runway – offset from the centreline by 50m – for several seconds at 100ft, before apparently attempting to make a belated correction to the approach.

BEA says the captain “made a left turn to return to the runway” and the aircraft began to descend once again.

The 777 overflew the displaced threshold of runway 25 at about 50ft with a descent rate of 1,000ft/min, triggering another ‘sink rate’ alarm.

Although the pilots increased the thrust – by advancing the levers from 36° to 70° – they did not activate the go-around switch.

Engine power rose but the aircraft continued to descend and its right main landing-gear touched down with a 1.96g impact, with the aircraft 10° nose-up and banked 16° to the right. Two seconds later the 777 lifted off again.

It airspeed had fallen to 117kt and the crew advanced the thrust levers again, towards the 82° position, before the aircraft climbed away.

Air traffic control informed the crew that the aircraft had touched down. The 777 was examined after it subsequently landed on runway 07, and this inspection revealed the jet had sustained a strike to the leading edge of its right wing and the tip of its right-hand horizontal stabiliser.

Friction marks some 28m in length were located on the right side of runway 25, about 161m beyond the displaced threshold.

BEA says the aircraft remained powered after landing and the cockpit-voice recorder was overwritten.

“In the absence of the [recording] it was difficult to assess with certainty the crew’s decision-making process,” it states. BEA says it could not confirm when go-around calls were made nor determine the involvement of a third pilot who was also situated in the cockpit along with an engineer.

But it says the captain had little practice or recent experience of the peculiarities of the runway 25 approach, and that the lack of an aim to achieve stability and the late abort of the unstable approach contributed to the serious incident. None of those on board, which also included five passengers in the cabin, was injured.