UK regulators have hailed the successful prosecution of a drone operator for threatening the safety of a vintage Hawker Hurricane fighter as a warning to other users of unmanned air vehicles (UAVs).

Mark Bagguley, of Chatsworth Road, Fairfield, Derbyshire on 9 January plead guilty to charges of endangering an aircraft and operating an aircraft out of the visual line of sight. 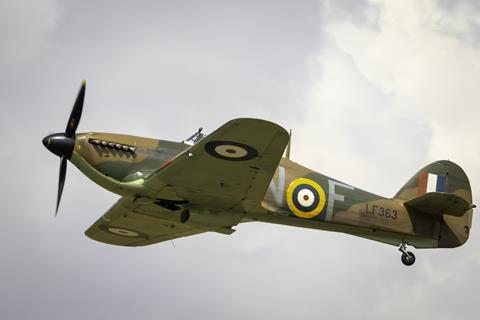 Drone was flown too close to Hurricane’s wing

The incident happened at the Buxton carnival on 9 July 2022, during a fly-past by the Hurricane of the Royal Air Force’s Battle of Britain Memorial Flight.

The UAV was subsequently seized and data analysis showed it was flying over Buxton at the time of the fly-past, in contravention of an airspace restriction in place at the time which banned all other flying in the area, including of drones.

“Flying a drone and endangering an aircraft in this way is totally unacceptable. Drone users have an obligation to understand and follow the rules. While flying a drone can be great fun, it also comes with significant responsibilities,” says Jonathan Nicholson, assistant director at the UK Civil Aviation Authority.

“People need to check airspace before they fly their drone and only fly where it is safe and legal to do so.”

Bagguley will appear before magistrates again in February for sentencing.