The confused emergency evacuation of a Qantas Airways A330-300 resulted in the airline revising some procedures, including communications with passengers.

The evacuation occurred at a Sydney airport gate on the morning of 15 December 2019. The A330 (VH-EBC, MSN506) had just turned back from operating service QF575 to Perth owing to hydraulic problem, according to a final report by the Australian Transport Safety Bureau (ATSB). 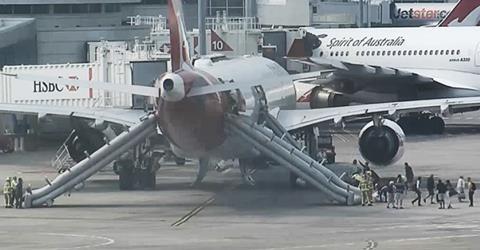 After detecting the hydraulic fault seven minutes into the flight, the aircraft returned to Sydney and landed uneventfully. Since the fault rendered the nosewheel inoperable, the aircraft was towed to the gate. The crew activated the auxiliary power unit (APU) to maintain air conditioning.

After the A330 reached the terminal, haze/smoke began to fill the cabin and flight deck. This was later attributed to APU ingesting hydraulic fluid.

Because the aircraft was at the gate, with aerobridges in the process of connecting to the L1 and L2 doors, the crew had disarmed the cabin doors. It was at this moment that the pilot ordered an evacuation owing to the haze/smoke.

“The evacuation occurred at a unique time when cabin crew members had completed their shut-down duties and the aircraft was at the terminal with all the doors disarmed,” says ATSB. “Although cabin crew had covered a similar scenario during their initial training, in subsequent evacuation training the doors would always be armed.”

In the ensuing evacuation using both aerobridges and slides, some passengers carried baggage – delaying the evacuation and increasing the chance of injury. Some passengers needed instruction in the use of the slide.

The first officer, who had entered the cabin, even discovered a passenger attempting to re-board the aircraft from the aerobridge to retrieve a bag. The “first officer directed them to leave the aircraft,” says ATSB. 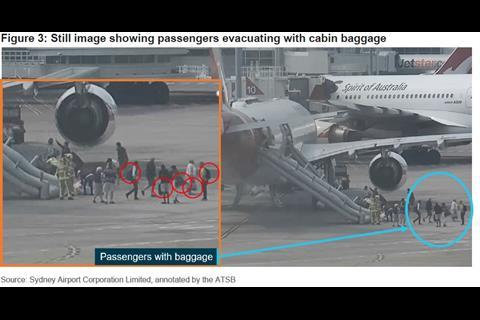 Passengers with bags depart the aircraft 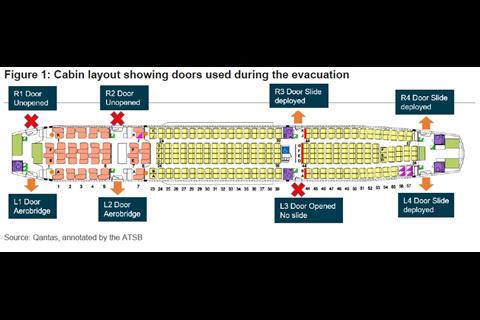 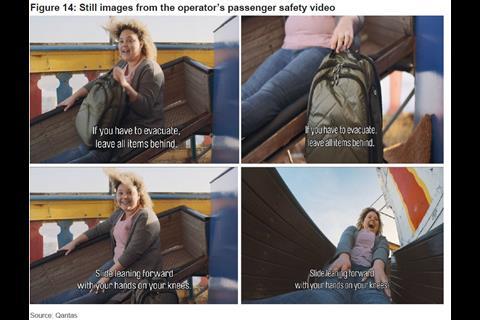 Qantas's updated safety video highlights that bags need to be left behind, and the use of emergency slides

Of the 222 passengers, 129 used the aerobridges and the other 93 used the three available slides. There were 10 crew on the jet.

The ATSB found that the crew’s evacuation commands did not include phrases such as ‘leave everything behind’ and ‘jump and slide.”

“Consequently, passengers would generally not receive specific guidance until they reached an exit, which could potentially slow an evacuation,” says ATSB.

“The operator also did not have a procedure for a rapid disembarkation, which would allow for rapid deplaning at a slower and more controlled pace than an emergency evacuation.”

The evacuation resulted in one passenger suffering serious injuries with tendon ruptures in both knees, and five suffering minor injuries.

Following the accident, Qantas updated procedures, such as the use the APU following a hydraulic leak and other hydraulic-related fixes.

In addition, Qantas updated training to include crew physically demonstrating procedures for an evacuation at the terminal.

ATSB adds that Qantas also changed its safety video to show passengers how to descend an escape slide, and was “looking to incorporate ‘leave everything behind’ into its primary evacuation commands, and developing a procedural framework for the rapid disembarkation of passengers in circumstances where an evacuation and the use of escape slides may not be necessary.”

The ATSB adds that the evacuation shows that crews must be ready to react to an emergency at any moment until everyone has disembarked.

In response to the ATSB report, Qantas fleet safety captain Debbie Slade had this to say: ”The captain made the right decision to evacuate the aircraft and our crew worked hard to get passengers off the aircraft as quickly and as safely as possible. We know this would have been a very unsettling experience for our customers, and we thank them for responding when they were asked to evacuate. Since this incident occurred back in 2019, we have provided additional training for pilots and cabin crew in responding to situations like this.”

Updated with remarks from Debbie Slade of Qantas.