In October, HAI applied to the FAA for exemptions from the agency’s standing rules on flying with inoperable radio altimeters. It made the request as it became clear that telecom companies’ 5G phone networks on the so-called C-Band may interfere with critical aircraft instruments.

“Today we received notice that our petition for exemption was partially approved,” says John Shea, HAI’s director of government affairs, on an HAI webinar on 13 January.

While the exemption is “a very positive development” for rotorcraft in general and helicopter air ambulance (HAA) operations in particular, “there are a number of issues and industry segments that were not covered”, he says. 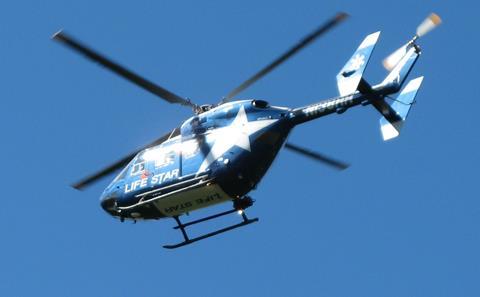 “Based on the unprecedented nature of the widespread impacts to radio altimeters … the FAA will grant relief to part 119 certificate holders conducting HAA operations in areas in which the FAA has determined that 5G C-Band interference affects or might affect the radio altimeter,” the FAA writes in its 13 January approval.

Helicopters used in medical transportation often land and take off from locations that are not airports or helipads to evacuate victims of natural disasters or vehicle accidents. At night, operators often use night-vision goggles (NVGs) to assist with situational awareness.

The FAA says this form of transportation must be maintained, even if an aircraft’s altimeter is functioning incorrectly due to interference from new cell phone networks.

The 5G networks are scheduled for launch this month.

The transmissions, to first be introduced by Verizon and AT&T, will be in the 3700-3800 MHz range, though companies have approvals to eventually transmit between 3700 MHz and 3980 MHz. While the cellular industry maintains that 5G is safe to aviation, the FAA and other aviation groups say that range is too close to the 4200-4400 MHz range used by radio altimeters, and interference is possible.

The air ambulance operators must now apply for a letter certifying an “alternative method of compliance” with FAA rules to continue these operations in the presence of possible C-band interference.

“From bumping around to complete loss of function to sustained erroneous output that is not indicated as erroneous, that could be hundreds or thousands of feet away from the true altitude,” he says. “Based on our testing there’s not a failure mode that we can safely rule out.”

Most helicopters operate close to the ground, so this kind of erroneous altitude information could lead to controlled flight into terrain.

“Federal police, ambulance, fire and rescue – they will have to be conscious at all times about their radio altimeters and have a heightened awareness that they may have erroneous or misleading information,” adds Nick Kefalas, a Lockheed Martin technology fellow at Sikorsky Aircraft.

The conflict has been brewing for some time but came to a head last month when airframers, airlines, lobby groups and pilot unions called on the cell phone industry to delay introduction of 5G networks, giving the FAA and the Federal Communications Commission (FCC) time to find a robust solution to technical concerns..

Last week, Verizon and AT&T agreed to delay introduction of 5G by two weeks, until 19 January.

The NOTAMs bar aircraft operators from performing auto-landings and other radio-altimeter-based automated flight manoeuvres, and the use of head-up displays and enhanced flight vision systems “to touchdown” at airports across the USA, including those in many major metropolitan areas, beginning on 19 January.

The orders affect all aircraft except those equipped with “approved alternative methods of compliance”.

The regulator and industry groups are now working to address potential operational impacts, with numerous industry groups saying flight delays and “substantial disruptions” to both fixed-wing and rotorcraft operations are inevitable.