Corrosion-induced fatigue cracking caused the left main landing gear of a FedEx Boeing MD-10-10 Freighter to collapse at Fort Lauderdale in 2016, according to the National Transportation Safety Board.

Additionally, the NTSB concludes that FedEx's failure to overhaul the gear at Boeing's recommended eight-year interval contributed to the accident.

The company has since inspected all main landing gears on its MD-10-10Fs and removed from service 16 landing gear cylinders it identified as "concerns", the NTSB says.

“Safety is our first priority," FedEx tells FlightGlobal. "This aircraft was maintained in accordance with FAA-approved maintenance schedules and standards."

"We have made enhancements to our maintenance and inspection protocols to further enhance the safety and reliability of these aircraft,” the company adds. 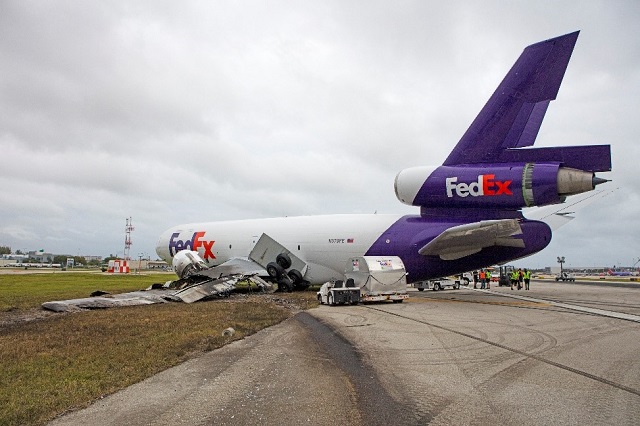 The incident occurred as the FedEx MD-10-10F (registration N370FE) landed on Fort Lauderdale-Hollywood International airport's Runway 10L at 17:51 local time on 28 October 2016. The aircraft was operating FedEx flight 910 from Memphis.

After touching down, the crew heard a "bang" when they braked and the aircraft yawed left and came to rest off the left side of the runway, according to the NTSB.

Though a nearly-empty fuel tank exploded, the two crew members escaped, with the captain sustaining minor injuries, says the report.

"Investigators found the failure of the left main landing gear was the result of a metal fatigue crack that initiated within the gear," the NTSB says. "The crack went undetected and gradually progressed until the gear collapsed."

The crack was "between the cylinder inner diameter surface and the air filler valve bore surface", it adds.

The gear had last underwent an overhaul in February 2008, at which point technicians applied cadmium plating to the gear's cylinder, a treatment which can prevent fatigue cracking, says the NTSB.

But that plating was missing on the collapsed gear, and investigators could not determine if the plating failed to properly bond, came off over time or was removed by maintenance workers.

Though Boeing recommends the MD-10-10F's gear be overhauled within eight years or 7,500 flight cycles, FedEx's procedures called for overhauls every nine year or 30,000 cycles, the NTSB says.

"The fatigue crack would likely have been detected during an overhaul," it adds.