A Boeing 777-200 engine fire following an engine failure last month was not fed by fuel and burned outside the core of the Pratt & Whitney PW4077 turbofan.

That is according to the National Transportation Safety Board (NTSB), which on 5 March says the pilots were successful in shutting off fuel to the badly damaged engine. 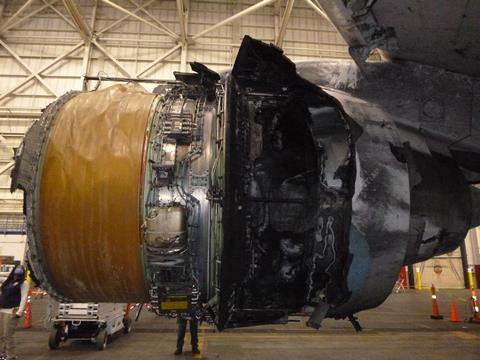 In an investigation update, the NTSB also reveals more details about the incident and says investigators found evidence of metal fatigue on the engine’s failed fan blade.

“Initial examination of the right engine fire damage… found it was primarily contained to the engine’s accessory components, thrust reverser skin and composite honeycomb structure of the inboard and outboard thrust reversers,” the NTSB says.

Early after the accident, the agency said it was seeking both to understand why the engine failed and why it remained on fire following the failure. 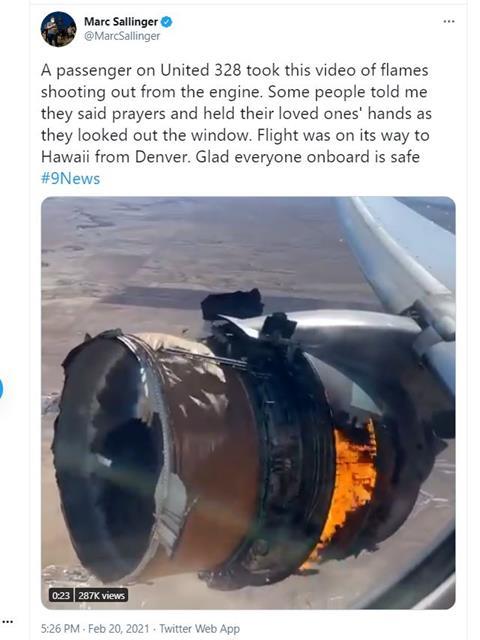 “The spar valve, which stops fuel flow to the engine when the fire switch is pulled in the cockpit, was found closed. There was no evidence of a fuel-fed fire,” the NTSB says. “Examination of the engine accessories showed multiple broken fuel, oil and hydraulic lines, and the gearbox was fractured.”

The engine’s aft cowling “appeared to be intact and undamaged, and all four pressure relief doors were found in the open position”.

Shortly after taking off from Denver, at about 12,500ft altitude and travelling at about 280kt (519km/h), the pilots of United flight 328 “advanced power” to limit the amount of time the aircraft would be flying through turbulence.

“Immediately after the throttles were advanced a loud bang was recorded on the [cockpit voice recorder],” the NTSB says. Information from the flight data recorder indicates “the engine made an uncommanded shutdown”.

The pilots declared an emergency and “discharged both fire bottles into the engine”. Needing to get on the ground quick, they did not dump fuel, the NTSB says.

On the power of a single engine, the captain piloted the aircraft back to Denver, landing without injuries to any passengers or crew. 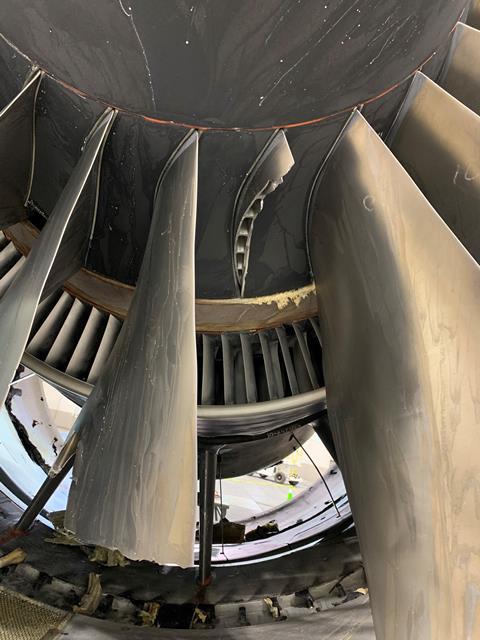 “Preliminary findings from the scanning electron microscope examination have identified multiple fatigue fracture origins on the interior surface of a cavity within the blade,” the NTSB says. “The blade’s fracture surface was consistent with fatigue.”

When the blade failed, the engine had been in service for 2,979 flight cycles since its previous inspection. It had undergone thermal acoustic image (TAI) inspections in 2014 and 2016, and the 2016 data had been re-examined in 2018 following a similar inflight failure that year of a 777’s PW4000, the NTSB notes.

On 22 February, P&W issued a “special instruction” that calls for affected engines’ fan blades to undergo TAI inspections at 1,000-cycle intervals. The following day, the US Federal Aviation Administration issued an emergency order requiring airliners to complete the inspections before further flight. 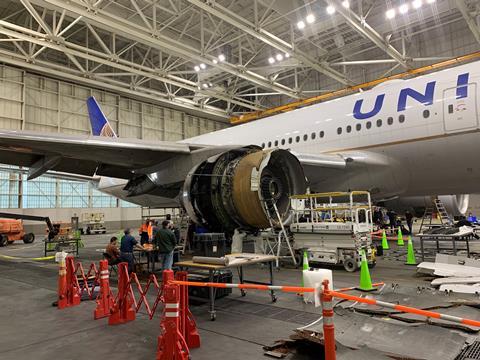