While unexpected events during approach and landing can add to a flight crew’s already high workload, following standard operating procedures can ensure a safe approach is carried out, says the Australian Transport Safety Bureau (ATSB).

It made this point as it issued the final investigation report into a double go-around of a Jetstar Airbus A320 in May last year.

The aircraft, registered VH-VQK, was on approach into Ballina/Byron Gateway Airport, on a flight from Sydney.

The first officer, the pilot flying the aircraft, suggested a visual approach, given the generally good weather conditions. The captain, who was the pilot monitoring, agreed.

As the crew commenced descent they became aware of a helicopter conducting right circuits at the airport.

Descending to about 2,100ft (640m), the first officer disconnected autopilot and began to fly the aircraft manually. They subsequently realised that airspeed and altitude were higher than normal approach profiles.

“The captain recognised the problem and recalled thinking that a go-around would be required, but due to the circuit traffic he wanted the aircraft established on final approach before commencing the go-around procedure,” the ATSB report states.

As the first officer levelled the aircraft, its speed accelerated to the limit speed for Flaps 3, 185kt (342 km/h), which was the flaps setting when go-around was performed. He then asked the captain to reduce the speed to 139kt, in preparation for approach.

The first officer set the engine thrust to idle, believing that the autothrust system would not prevent a flap overspeed. However, the autothrust disengaged and generated a warning.

The captain noticed that the aircraft’s pitch attitude was 10° nose up with Flaps 3 and idle thrust, and ordered his colleague to place both thrust levers back into the climb detent and reengage the autothrust system.

However, at about 700ft, a master warning rang out: the landing gear had not been deployed. It was only four seconds later that the crew did so, and another two seconds before they elected to perform a second go-around. 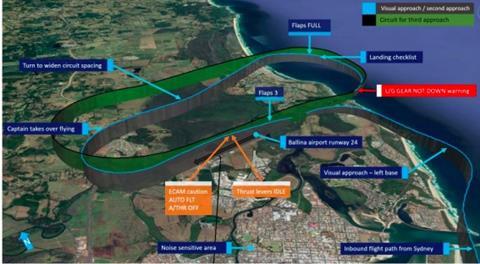 In its findings, the ATSB noted that during the first go-around, the crew “did not fully complete the standard go-around procedure”, which resulted in the flaps remaining at Flaps 3, instead of Flaps 1.

The crew also failed to notice that the landing gear was not deployed as the landing memo had not been reset, given that the aircraft did not climb through 2,200ft.

The ATSB also noted that the captain elected to conduct non-standard right circuits. “This increased the potential for traffic conflicts with other aircraft, and flight crew workload managing such conflicts,” it adds.

To this end, the ATSB urges flight crew to adhere to standard procedures.

“Adherence to standard operating procedures and correctly monitoring the aircraft and approach parameters provides assurance that a visual approach can be safely completed.

“The selection of inappropriate auto-flight modes, unexpected developments, or any confusion about roles or procedures can contribute to decisions and actions that increase the safety risk to the aircraft and its passengers,” it adds.

Cirium fleets data indicates VH-VQK was delivered to Jetstar in 2006 and is still flying with the carrier.