Releasing its final report into the 2017 incident, investigators from the Australian Transport Safety Bureau (ATSB) found that the number one main wheel ruptured because of loosened tie bolt assemblies. 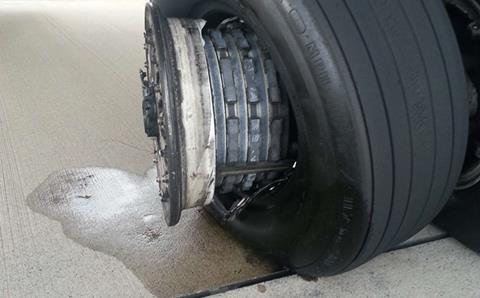 Damage to the number one main wheel assembly.

The loose tie bolt assemblies were caused by the presence of anti-seize compounds, which affected clamping forces, ATSB states.

The incident, which involved the aircraft registered VH-VUH, occurred at Brisbane Airport. The narrowbody was to operate a flight to Melbourne, and was holding at a taxiway when the flight crew heard a loud noise.

Thinking it was a burst tyre on the left main landing gear wheel, the crew attempted to return the aircraft to the gate. However, they were held short, when an engineer noticed that the number one main wheel assembly had failed.

The aircraft could not be jacked and towed via the axle because of the damaged wheel, the ATSB notes. Instead, engineers performed a double wheel change on the tarmac, before the aircraft was towed to a maintenance facility for inspection.

ATSB’s own inspections revealed that 12 of the 18 tie bolt assemblies were so loose that they could be twisted by hand. It also found several nuts “noticeably backed off” the thread.

“The tie bolt assemblies were visually inspected and found to be the correct part in every instance with no evidence of damage,” investigators state. However, they note “a region of fracture surface” near one of the tie bolt holes exhibited fatigue crack progression marks. 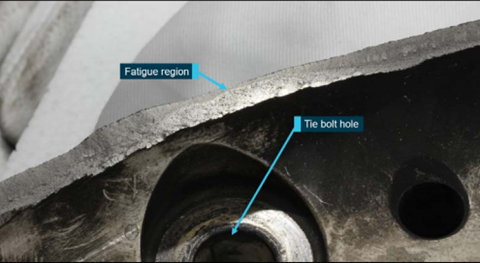 In its findings, the ATSB says the loosening of the tie bolt assemblies were “likely due to grease or anti-seize compound between the mating wheel halves.”

“This resulted in fatigue cracking and ultimately, wheel rupture,” the agency states.

It also found that there were “no inspections for detecting loose tie bolt assemblies in service, and no effective mandated risk controls to prevent wheel rupture”.

Following the incident, Virgin Australia performed a fleet-wide inspection of the particular wheel-type. It found two other wheels that had loose tie bolts. One of them was “relatively new, and had not yet required a tyre change”, the ATSB notes.

To this end, Virgin Australia has implemented regular inspections to identify and prevent the loosening of tie bolt assemblies. Safran, which manufactured the wheels, also updated its maintenance manual with more detailed instructions on applying anti-seize compound.

The ATSB states that the particular wheel type was installed on approximately 2,000 737 NG aircraft in service worldwide.