Two pilots in two different aircraft reported seeing a man in a jetpack near the approach path of landing aircraft at Los Angeles International airport on 30 August, the Federal Aviation Administration says.

The man, who has not yet been found, was said to be flying around 3,000ft above the ground about 300 yards south of the approach course, and was dangerously close to the landing aircraft. 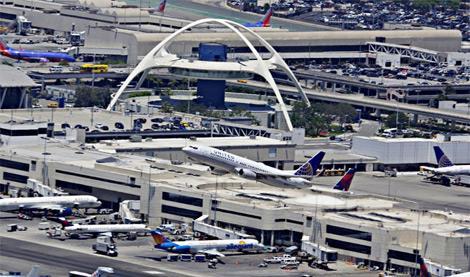 An audio recording of communications between the aircraft and the Los Angeles control tower circulated widely on social media.

“Tower, American 1997, we just passed a guy with a jetpack,” the first pilot says in his call to the control tower.

A few minutes later, a pilot for Southwest Airlines says, “Tower, we just saw the guy pass us.”

Later in the recording, the tower controller warns a JetBlue flight of the object and adds, “Only in LA.”

The FAA confirmed the reports, saying on 1 September, “Two airline flight crews reported seeing what appeared to be someone in a jet pack as they were on their final approaches to LAX around 6:35pm PDT Sunday. The FAA alerted local law enforcement to the reports, and the FAA is looking into these reports.”

The Federal Bureau of Investigation (FBI) confirmed the reports and is following up.

”The FBI is investigating the reports made this past Sunday by airline pilots who’ve said they saw a man on a jetback upon their approach to LAX,” the agency says on 2 September.

Since the reports surfaced on Monday, some doubt has been cast upon the theory that it indeed was a man with a jetpack. Most jetpacks available on the market today are not capable of flying a human to that high altitude.