The Pentagon has convened a service-wide aviation safety panel in response to a 2020 investigation finding high rates of aviation accidents across the US military.

The results of the 2020 aviation safety audit were staggering: between 2013 and 2018, US forces suffered 6,000 aviation safety incidents, causing 198 deaths and 157 lost aircraft. Those figures excluded combat losses.

The National Commission on Military Aviation Safety (NCMAS), which completed the 2020 study at the behest of Congress, assessed the destruction as costing more than $9 billion. When expanded to include 2019 and 2020, the figures grow to 224 lives lost, 186 aircraft destroyed and $11.6 billion in expense.

On 26 August, the US military followed through on a recommendation from the report when it held the first meeting of its Joint Safety Council (JSC) – a body established specifically to address defence aviation accidents. 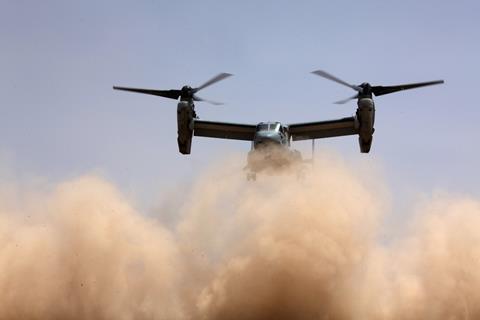 A US Marine Corps MV-22 Osprey kicks up a dust cloud during landing. The tiltrotor aircraft has been involved in numerous fatal incidents during its service life

The body, scheduled to meet quarterly, consists of representatives from the US Army, US Navy (USN), US Marine Corps (USMC), USAF and National Guard. It will focus on “regulations and policy reforms, such as safety data standards and safety-related maintenance, supply chain, personnel management and training challenges”, says the Pentagon.

The move responds to the NCMAS, a panel composed of retired military aviators, a former National Transportation Safety Board (NTSB) member and an aerospace manufacturing chief executive. Its 2020 report cited insufficient flight hours, inadequate training, inconsistent funding and risky maintenance practices as main culprits for the US military’s air accidents. The report also noted that squadrons faced a “relentless operations tempo”, with ongoing demand for aviation assets across the Pentagon’s global posture.

Notably, the report highlighted the disparity between US military and US civilian aviation safety, saying “the overwhelming majority of [military] mishaps could not be attributed to the inherent risk of military aviation”.

By comparison, NTSB data states that between 2010 and 2019, Part 121 Regularly Scheduled Air Carriers in the USA logged just over 300 accidents and 16 fatalities. 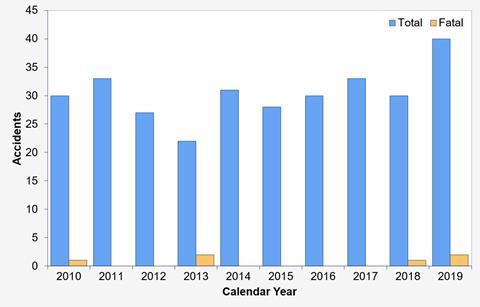 Accident data from US commercial air carriers. The US military logged substantially more accidents and fatalities than the commercial aviation sector, in half the time

NTSB data for general aviation, which includes recreational flying and higher-risk forms of aviation such as powered parachutes and skydiving, shows accident and fatality rates more in line with military figures cited by the NCAMS.

The DoD categorises safety incidents – which it calls “mishaps” – into classes from A to E, depending on severity. The most serious – Class A – are those resulting in fatalities or disabilities, damage exceeding $2.5 million or destruction of a military aircraft, according to the US military.

Between 2007 and 2018, the USAF, USN and US Army logged a combined Class A Mishap rate of roughly 1.5 events per 100,000 flying hours – substantially higher than the commercial industry’s 0.17 rate, the NCMAS report shows. USMC figures were substantially worse, exceeding two Class A accidents per 100,000 flight hours for most of the 2007-2018 period. That service’s rolling rate of Class A accidents has steadily increased since 2009, even while the other services’ rates remained flat or declined. 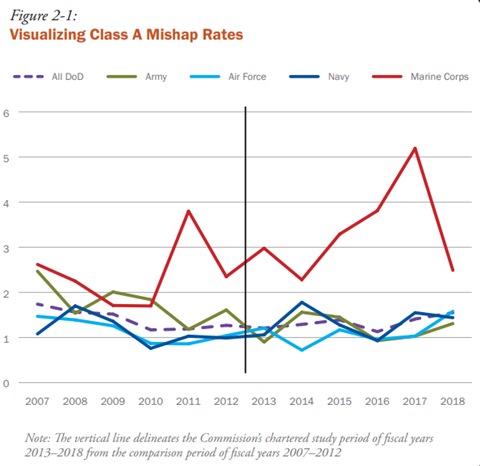 To bring down the accident rate, the NCMAS’s 2020 report recommended that the JSC be formed to establish universal military aviation standards across the Pentagon’s sprawling bureaucracy. Such a body should be empowered to collect and analyse safety data, which the NCMAS noted was sorely deficient within the DoD.

Congress obliged, and ordered the council’s creation in 2022.

If the intent was to sidestep the Pentagon’s labyrinthine hierarchy, the NCMAS may yet be frustrated. According to the DoD, the body falls under the Defense Safety Oversight Council and the Deputy’s Workforce Council and Management Action Group.

The 2020 safety report does not provide details about specific accidents, making unclear which aircraft types were most frequently involved.

However, the study’s timeline roughly coincides with the USMC’s adoption of an aircraft with a checkered safety record: the Bell Boeing V-22.

The USMC developed the MV-22 to replace its Sikorsky CH-53D Sea Stallions, declaring the type at initial operating capability in 2007. Other operators of V-22 variants include USN, USAF special operations and Japan Ground Self-Defence Force.

The $71 million tiltrotor has been involved in numerous crashes, many of them fatal, and the subject of intense scrutiny. Between 1991 and 2022, V-22s suffered 36 accidents, according to the Aviation Safety Network, a service of the US non-profit Flight Safety Foundation. Two fatal and one non-fatal Osprey crashes have occurred this year alone so far.

The family of marine killed in a 2015 V-22 crash in Hawaii unsuccessfully sued Boeing, Textron Bell, Eaton Aerospace and the federal government over that incident. A USMC investigation found that excessive dust caused a catastrophic engine stall.

Military leaders and the V-22’s designers attribute some of the issues to early difficulties with the tiltrotor’s revolutionary design, insisting safety concerns have been addressed. Following a June crash in California that killed five marines, a senior member of Boeing’s vertical lift team told FlightGlobal he is “very confident” the V-22 is safe, noting the type’s 600,000 safe flight hours.

However, on 16 August USAF Special Operations Command grounded its fleet of CV-22s, citing multiple incidents of hard clutch engagement, an occurrence wherein the clutch connecting the engine to the rotor gearbox slips. The USMC declined to follow suit and ground its V-22 fleet, saying it has previously identified the issue and trained pilots on how to react.

The USAF cleared its CV-22 for flight duty two weeks later on 2 September, without identifying the cause of the clutch issue. The service has instead released modified guidelines for aircrew meant to avoid situations likely to cause the problem. The scenario has also been added to simulator training curricula.

The USMC currently has 287 V-22s, according to the FlightGlobal 2022 World Air Forces directory. The USAF has 51 V-22s and the USN has 12, with nearly 50 more on order. Japan has four Ospreys in service, with an additional 10 planned.

Story modified 9 September to include new details of the USAF CV-22 grounding.