A captain’s decision to continue a flight despite engine trouble caused a Convair C-131B to crash into the Atlantic Ocean in February 2019, according US investigators.

The accident occurred during a cargo flight on 8 February 2019 from Nassau’s Lynden Pindling International airport in the Bahamas to Miami-Opa locka Executive airport. 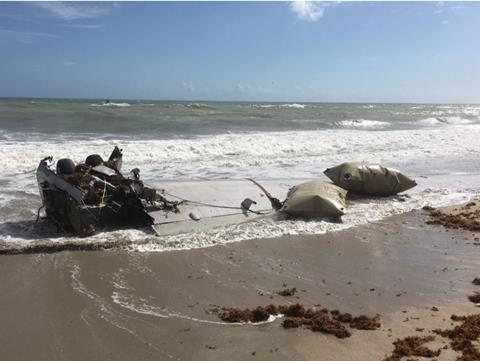 The left wing of the crashed Convair washed ashore, though the rest of the aircraft was not recovered. The Convair went down 32nm from Miami on 8 February 2019, killing the captain.

The Convair, registration N145GT, was operated by Conquest Air, a company with offices in Miami and Nassau, according to Conquest’s website. Conquest could not be reached by phone for comment.

The NTSB’s report says that during the outbound flight to Nassau that day the first officer was unable to adjust the engine using the “left engine propeller control”.

After landing at Nassau, the pilots tried unsuccessfully to notify their maintenance department about the problem via text message. The captain then decided they would try to reset the engine control upon engine restart, and call maintenance if unsuccessful.

The pilots were indeed able to reset the control, and they took off normally on the return flight from Nassau to Miami.

However, as the aircraft climbed through 4,000ft, the left engine propeller control stopped working and “inadvertently increased power to 2,700 rpm”, says the report.

The captain took control from the first officer, levelled the aircraft at 4,500ft and decided to continue the roughly 160nm (296km) flight, nearly all of it over open water, to Miami.

Next, the left engine also surged and lost power.

The aircraft lost altitude and crashed into the sea about 32nm east of Opa-locka.

“The captain was unresponsive after the impact and the first officer was unable to lift the captain from his seat,” says the report. “Because the cockpit was filling rapidly with water, the first officer grabbed the life raft and exited the airplane from where the tail section had separated from the empennage.”

A US Coast Guard helicopter rescued the first officer.

The first officer told investigators he did not know why the engines failed. The NTSB’s report does not mention the cause of the engine failure, noting the aircraft sunk and was not recovered.

The NTSB attributes the accident to “the captain’s decision to continue with the flight with a malfunctioning left engine propeller control and the subsequent loss of engine power on both engines for undetermined reasons”.

“Contributing to the accident was the first officer’s failure to challenge the captain,” it adds.

The captain had logged 23,000h of flight time, while the first officer had 650h of experience, says the investigatory board.