Corrosion related to extensive low-level flying over the ocean led to the failure of a Pratt & Whitney Canada (P&WC) PW100 engine aboard a De Havilland Canada DHC-8-315 operated by Surveillance Australia.

On 11 November 2019 the aircraft, VH-ZZE, was about to start its take-off roll from Darwin Airport when the crew heard a loud bang, according to the Australian Transport Safety Bureau (ATSB). The crew aborted the takeoff while air traffic control reported smoke from the right-side PW100. 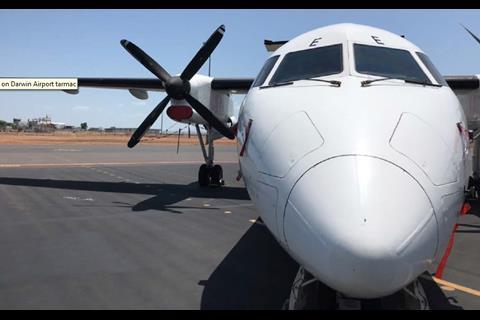 VH-ZZE was the Dash-8 involved in the serious incident 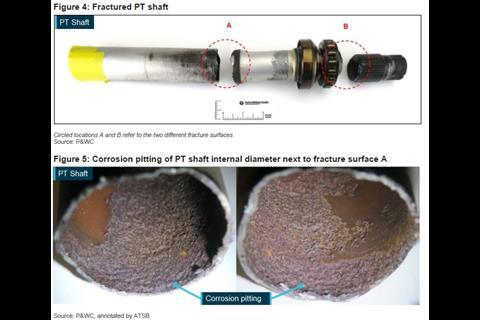 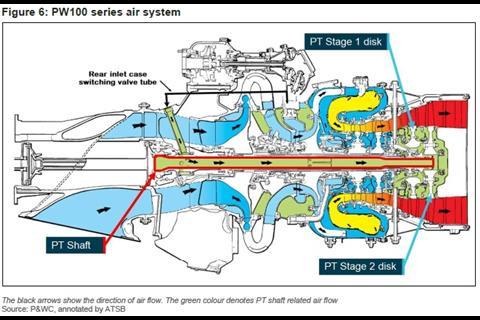 Metal fragments were later found on the runway. An external inspection of the engine showed that the power turbine (PT) assembly had suffered extensive damage.

None of the aircraft’s four crew were injured during the incident, which the ATSB categorises as “serious”.

“The PT shaft of the aircraft’s right engine fractured due to fatigue cracking, resulting in secondary damage and engine failure,” says ATSB.

“The fatigue cracking initiated at corrosion pitting, which was probably associated with prolonged low-altitude operation in a marine environment.”

The engine’s PT shaft had been replaced in 2011, and “excessive corrosion pitting” had been observed on the previous shaft. This information, however, was not shared with P&WC owing to less formal reporting requirements a decade ago.

“The ATSB investigation also identified that the PT shaft in … PW100 series engines operating in certain marine environments is susceptible to corrosion pitting, which can grow undetected between scheduled inspections, increasing the risk of shaft fracture and engine failure,” says ATSB.

P&WC has said that it reviewing historical overhauls to identify engines and operators that could also be exposed to increased risk of PT shaft corrosion.

The company has also proposed a range of actions that could address the issue, including borescope inspections between overhauls, and the possibility of removing contaminants inside the shaft during maintenance.

“The corrosion-related fracture of the power turbine shaft of the aircraft’s engine in this occurrence highlights that corrosion pitting that exceeds repair limits on safety-critical components should be a warning sign to manufacturers, maintainers, and operators that the existing maintenance strategy may not be effective,” adds ATSB.