A US Air Force (USAF) crew shut down their only good engine prior to the fatal crash of a Bombardier E-11A communications aircraft in Afghanistan’s Ghazni province.

The aircraft (11-9358) was operating a routine mission from Kandahar on 27 January 2020 when its left engine lost a fan blade, causing it to shut down and creating significant vibration. 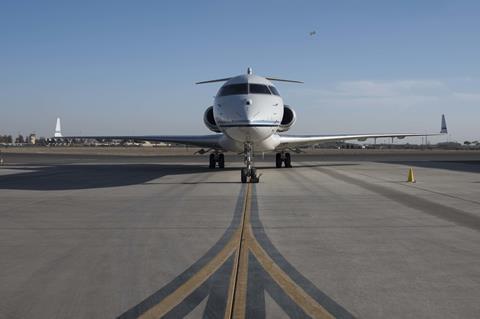 About 24s after this, the crew, apparently confused about which engine had failed, shut down the right engine.

“The aircraft was approximately 230 nautical miles (426km) from Kandahar Airfield when the dual engine out occurred, and neither engine airstarted to provide any usable thrust,” says the USAF Air Combat Command.

“The crew initiated a mayday call to air traffic control stating they had an engine failure on both motors and intended to proceed to Kandahar.”

The report believes that the pilot decided not to land at much nearer airfields, including Kabul, because he felt he could restart the left engine, allowing him to reach Kandahar, which was well beyond the gliding distance.

The crew’s failure to understand that it was the left, not the right engine that had failed, as well as the decision to fly 230nm to Kandahar, were the key contributors to the crash.

The investigation largely relied on circumstantial evidence. The cockpit voice recorder failed when the left engine shut down, and the flight data recorder stopped recoding when the right engined was shut down.

The investigation surmised that no attempt was made to restart the right engine, although an air restart should have returned it to operation.

“The crew tried maneuvering the aircraft towards Forward Operating Base Sharana, but did not have the altitude and airspeed to glide the remaining distance,” says Air Combat Command. “The crew unsuccessfully attempted landing in a field approximately 21 nautical miles short of Sharana. Both pilots were fatally injured and the aircraft was destroyed.”

The E-11A is derived from the Bombardier Global Express business jet, and is powered by two Rolls-Royce BR710 engines.

The E-11A serves in the BACN (Battlefield Airborne Communications Node) mission, serving as a hub for the transfer and sharing of voice, video, and imagery between military units on the ground and in the air.