Southwest and American will not fire unvaccinated workers despite federal mandate: CEOs

Neither Southwest Airlines nor American Airlines plan to fire workers who fail to receive coronavirus vaccines, as mandated by the US government for government contractors.

Dallas-based Southwest’s chief executive Gary Kelly says on 21 October that “a majority” of its employees have reported their vaccination status to the company already, and “a super-majority of those” are vaccinated, but he declined to give numbers.

That said, the airline is staring down a national vaccination mandate for all companies – including airlines – that contract with the US government. The deadline for their employees to be fully immunised is 8 December. 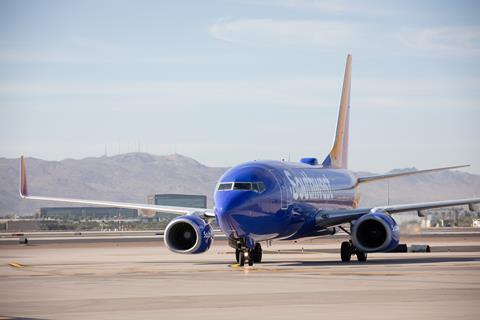 Southwest Airlines will not fire employees who decide against vaccination

“I am empathetic with those who don’t want to be vaccinated,” says Kelly. The company’s process in dealing with these employees is “still evolving” and the airline continues to “strongly encourage” its workers to get the jab.

Employees need to file a request for an exemption by 24 November, Southwest says. American has set the same deadline.

“We don’t expect anybody to leave American Airlines. And certainly, they’re going to be out there helping us during the holidays,” American Airlines president Robert Isom says on 21 October when asked about unvaccinated staff.

American expects only a “very small number of people” will either not be vaccinated or not receive an “accomodation request”, adds CEO Doug Parker.

The company has not finalised the process by which it will handle staff who are not vaccinated. “It is likely to be some combination of masking, self-declaration and testing,” Isom says.

American and Southwest are approaching the vaccination debate differently than its larger competitor United Airlines. Earlier this year, United mandated all US-based employees be vaccinated. The Chicago-headquartered company said earlier this month that it would be firing several hundred who chose to refuse the vaccines.

Atlanta-based Delta Air Lines, meantime, has imposed a $200 monthly surcharge to unvaccinated employees who are part of the company’s health plan to make up for higher risks.

Southwest says that while advocating for personal choice in this matter, the US government is a valuable customer it does not want to lose.

“Those contracts are important to us,” Kelly says. “In addition to that, [the government agencies] are our largest customers, so we are doing everything we can to maintain them.”

Last month President Joe Biden signed an executive order which demands all federal workers and contractors be vaccinated. The administration is developing a rule that would require employees at companies with more than 100 staff be vaccinated or submit to weekly testing.

That led to several pilot groups – including pilots at Southwest and American Airlines – to send letters to the government requesting exemptions from the requirement, claiming the jabs could have “career-ending” effects.

With the end-of-year holiday travel season ramping up around the time of the deadline, there is concern the mandate could have a negative effect on the air travel industry during a busy period.

“We are not going to disrupt travel, and the White House is clear they do not want travel disrupted at any time, not just at the holidays,” Kelly says. “They understand there is a process we have to work through.”

Kelly says the airline has not sought an extension of the 8 December deadline, and is doing its best to comply with the rules.

“It’s a political issue. It’s a polarising issue. And there are very strong feelings on both sides of this question,” he says. “My job is to take care of Southwest, to take care of all of our people, and we are going to do our darnedest to accomplish that.”