In response to a series of fatal aircraft crashes in Ketchikan, Alaska, US safety investigators are calling for the Federal Aviation Administration (FAA) to create special rules to address flight safety hazards for air tour operators in the region.

In a report released 29 November, the National Transportation Safety Board (NTSB) says seven air tour crashes – five fatal – since 2007 that have killed 31 people and seriously injured 13 others ”highlight the need for a more robust approach to reduce the risks to air tour passengers and the pilots flying them”.

“There have been too many air tour tragedies in Ketchikan, a place with unique — but well understood — safety hazards that endanger the lives of pilots and passengers alike,” says Jennifer Homendy, chair of the NTSB. “Unless the FAA acts swiftly, experience tells us to expect even more heartbreak and preventable loss of life.” 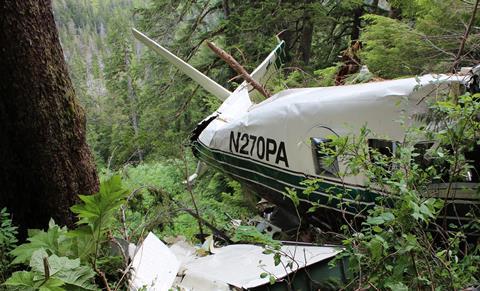 Other notable Ketchikan crashes include the 25 June 2015 flight into terrain of this DHC-3, which killed nine people.

About a dozen companies operate Part 135 air tours in Ketchikan between April and September, specialising in low-level flights “so passengers can view the remote, rugged terrain of the southeast portion of the Alaskan Panhandle near the Misty Fjords National Monument”, the report says.

The most recent crash cited in the NTSB report occurred in August 2021, when a De Havilland DHC-2 operated by Southeast Aviation crashed into a heavily wooded mountainside outside Ketchikan. The pilot and all five passengers died, and the aircraft was destroyed.

An NTSB investigation found that the pilot, who was flying under visual flight rules (VFR), encountered “deteriorating weather” upon entering a narrow valley. The pilot flew at low altitude, attempting to remain below the cloud ceiling and avoid entering instrument meteorological conditions.

The pilot’s decision to continue flying VFR was cited in the report as the probable cause of the “controlled flight into terrain”. During interviews following the accident, two air tour pilots familiar with the region said they thought the valley where the accident occurred was too narrow to perform an 180 degree turn.

Of the five fatal crashes cited in NTSB’s report, three involved flights operating under visual rules that entered instrument conditions. Cloudy and rainy conditions are common in southeast Alaska, as is “rapidly changing, localised cloud cover” in the area’s valleys, the report says.

“Pilots are at risk of impacting the area’s high terrain if they continue into cloudy conditions that obscure mountains, which may not be obvious when pilots turn to enter valleys,” the report says.

In 2009, Ketchikan air tour operators established a voluntary letter of agreement that established standard routes, reporting points and best practices. The fatal Southeast Aviation flight was not following a standard route when it crashed.

Additionally, the NTSB issued a total of 13 safety recommendations the FAA in 2008 and 2017 specific to improving safety of air tour operations in the Ketchikan area. “However, many of the resulting solutions adopted by the FAA involved voluntary operator actions that have proven ineffective or are no longer in effect,” the report reads.

The NTSB calls for the FAA to establish region-specific aviation regulations for Ketchikan, pointing to the success of air tour operation rules in “areas with distinct operational hazards, including the Grand Canyon and Hawaii”, it says.

Rules in such areas can include minimum flight altitudes, airspace limitations and enhanced equipment safety requirements.