The groups on 17 January submitted a joint letter to the US Environmental Protection Agency (EPA), which in October 2022 issued proposal concluding that lead in aviation fuel endangers public health. If that proposal is finalised, the EPA will respond with new emission standards, the proposal says.

The aviation groups agree that eliminating lead from aviation fuel is in the public interest. But, because the general aviation (GA) community still needs leaded fuel, they argue such fuel must for the foreseeable future remain readily available. 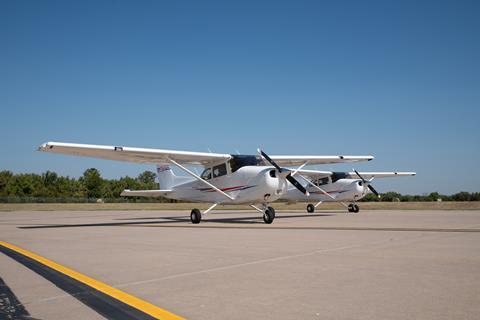 “The general aviation community remains committed to removing lead from aviation gasoline by the end of 2030 – and it may be sooner,” the coalition’s letter says. “But we cannot compromise the safe and efficient operation of the fleet of aircraft, or economically destroy the United States general aviation transportation infrastructure, by prematurely removing an essential fuel that many aircraft require for safe operation.”

“In the absence of readily-available and safe substitutes, EPA, the FAA and the general aviation community must work together to ensure safe and efficient transition to lead-free fuels,” it adds.

The lobby groups “[urge] the EPA, in coordination with the FAA, to ensure that any final finding and follow-on regulatory actions align with the development and deployment of a viable unleaded avgas alternative”.

Most of the USA’s 220,000 piston aircraft require what is commonly known as 100LL, which is high-octane, low-lead aviation fuel. A new unleaded fuel, UL94, can only be used in about 70% of those aircraft. Therefore, it “cannot be considered a 100% viable commercially available replacement for 100LL”, the groups say.

And using the wrong fuel can lead to engine failure with catastrophic consequences.

“Aircraft needing higher-octane fuel to fly safely include those carrying out important missions – such as search and rescue, disaster relief and law enforcement,” the groups say. “We must ensure that 100LL remains available at our nation’s airports until an appropriate transition to a viable replacement.”

In February 2022, the Federal Aviation Administration and the same pilot and aviation lobby groups launched a joint effort called Eliminate Aviation Gasoline Lead Emissions (EAGLE). The EAGLE partnership put forth a roadmap to phase out the use of leaded fuel for general aviation aircraft in the USA by 2030.

The introduction of unleaded fuel for GA aircraft has been on the industry’s agenda for years, but discussion was hastened after two airports in northern California stopped selling leaded aviation fuel at short notice.

On 1 January 2021, Santa Clara County, which manages Reid-Hillview airport east of San Jose, and San Martin airport, south of the city, banned the sale of 100LL, over FAA objections. They were the first in the country to do so. The coalition says in its comments that ”similar efforts in other municipalities are likely”.

In December, the US government pledged its support of the EAGLE initiative to the tune of $10 million.