Textron AirLand is accelerating research and development spending on its Scorpion light attack programme as it prepares for an imminent maiden sortie of the first production example.

It has been pulling forward investment in order to drive maturity into the platform as it looks to clinch a launch order, says Scott Donnelly, chief executive of Textron Aviation, one of the partners in the joint venture.

Speaking on a third-quarter results call on 20 October, Donnelly said a number of activities, including recently announced weapons tests, were under way as the programme entered what was essentially a “limited-rate production run”.

Certain activities could have been “put off” until a later date, he says, but as customer engagement has “stepped up considerably” it is the “right time for us to step up and demonstrate this aircraft and its performance capability and get much more aggressive about the marketing and test flights”.

He adds: “Waiting a year or spreading it out over a longer period of time won't help us, given the opportunities that we see out there in the not-too-distant future.”

Several aircraft are in production as it works to certificate the aircraft and mature manufacturing processes. First flight of the Scorpion in its new configuration will be “very soon”, he adds. 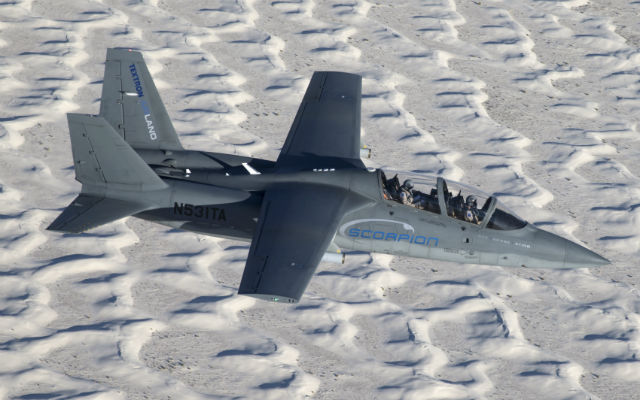 Donnelly declines to provide details on any specific customer negotiations, but says there is a great deal of interest in the jet, which is designed as a relatively low-cost light attack platform.

However, as the Honeywell TF731-powered aircraft is a self-funded development, if no customer can be found, Textron AirLand will have wasted millions in R&D spending.

Donnelly plays down the risk. “So is that a sure thing? No,” he says. “Do we see that the opportunity is real and that we think that there is a real future for this thing, and someday it could be a profitable line of business for the company? I'll have to say the answer is yes or we wouldn't have made the decisions to go ahead and take some pressure on earnings and pressure on cash to really take that final step and bring this thing to the market in a very real credible way.”

In July Textron AirLand signed a pact with the US Air Force agreeing on a certification process for the Scorpion. However, Donnelly provides no clarity on the timeline.