An independent Scotland would have an air force equipped with up to 16 air defence aircraft, six tactical transports, utility rotorcraft and maritime patrol aircraft, and be capable of “contributing excellent conventional capabilities” to NATO, according to a White Paper published by the Scottish National Party (SNP).

Outlining its ambition to establish an air force with an eventual 2,000 uniformed personnel and 300 reservists, the SNP says the organisation would initially be equipped with “a minimum of 12 [Eurofighter] Typhoon jets based at Lossiemouth, a tactical air transport squadron, including around six [Lockheed Martin] C-130J Hercules, and a helicopter squadron”. 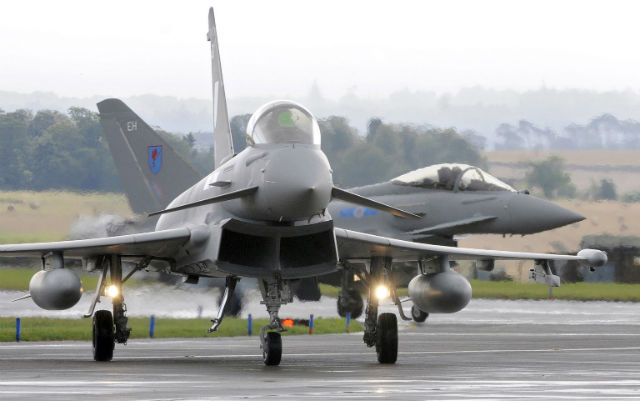 According to the document, “Key elements of air forces in place at independence, equipped initially from a negotiated share of current UK assets, will secure core tasks, principally the ability to police Scotland’s airspace, within NATO.”

An in-country air command and control capability would be established within five years of a decision in favour of independence, it continues, with staff also to be “embedded within NATO structures”.

Still stung by the 2010 cancellation of the Royal Air Force’s fleet of BAE Systems Nimrod MRA4 maritime patrol aircraft, which were to have been based in Scotland, the SNP says it plans to prioritise the procurement of a replacement capability within the same period. “The numbers maintained by comparable nations suggests a potential fleet of four,” it adds. No provision is included for military pilot training, however, with Scotland to seek “joint arrangements with allies”.

The proposals form part of a plan to establish a 15,000-strong defence force within 10 years, backed by 5,000 reservists.

“The final force levels will provide capacity for Scotland to make enhanced contributions to international partnership operations,” the SNP says, with air involvement to be contingent on the receipt of up to 16 Typhoons.

An independent Scotland would spend £2.5 billion ($4 billion) per year on defence and security, according to the SNP; down from a current £3.3 billion contribution to the UK’s annual military spending.

Another key aspect of the party’s defence strategy is the proposed removal of the Royal Navy’s nuclear submarine force from Faslane, with its White Paper referring to their Trident missiles as representing “an affront to basic decency”. Instead, the base would become home for the Scottish navy’s conventional vessels, and also for its defence forces headquarters.

The RAF currently has two frontline Typhoon squadrons based at Leuchars in Scotland. These are due to relocate to Lossiemouth next year, with a third unit to also be established at the site in 2015. Service sources say no alternative plan is currently being considered, despite the pending referendum, which will be held on 18 September 2014.

In written evidence submitted to the House of Commons Defence Committee earlier this year, the Ministry of Defence says: “It is the policy of the UK government to maintain the integrity of the existing UK, and we are supporting that position with evidence and analysis. The UK government is confident that the people of Scotland will choose to remain part of the UK, and is not planning for any other outcome.”