The US military's budget request for fiscal year 2015 includes cuts to a number of aircraft programmes, but Sikorsky and analysts call one item unique – the proposed cancellation of orders for 29 MH-60R Seahawks under a multi-year contract.

If approved by Congress, such a move would raise broad concerns about the surety of other contractors’ multi-year procurement deals, and affect orders for UH-60 Black Hawks from the US Army and some foreign partners under the same contract.

"I don’t believe a multi-year contract has ever been cancelled early,” says Tim Healy, Sikorsky's director of maritime programmes. “It’s a big deal for the country.”

Healy says Sikorsky is "very concerned" about the US Navy's intentions, noting that multi-year contracts allow companies to reduce costs by investing in infrastructure, processes and staff with confidence in being paid over many years. Sikorsky sells Black Hawks ordered through multi-year deals at a 10% discount over those in single-year contracts, he notes.

A cancellation would reduce “the confidence industry has to invest in cost-reduction,” Healy says. That could result in higher industry costs, which would be passed on to taxpayers, he adds. Cancellations are allowed under the contract terms, but result in termination penalties.

Aboulafia says those penalties tend to make "cancellation financially prohibitive. That way, all the contractors involved feel confident that they can invest in the future, and keep costs down." 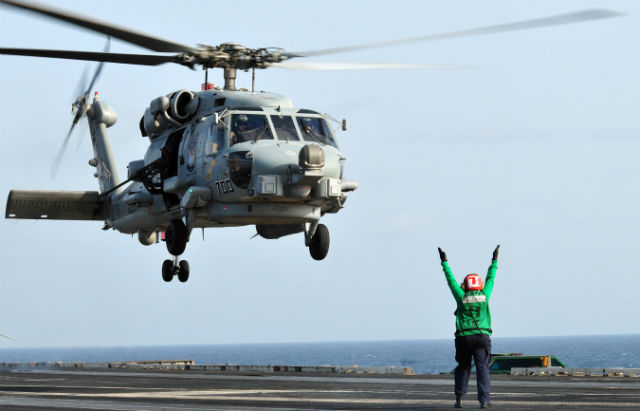 The contract in question calls for the USN, US Army and foreign partners to acquire roughly 650 Black Hawks and Seahawks between fiscal years 2012 and 2016. In its FY2015 budget request, the navy proposes cancelling the last 29 aircraft to be purchased in FY2016.

"I have concern [a Seahawk cancellation] will impact industry long-term," Glass said during the Navy League's Sea-Air-Space Exposition near Washington, DC. "We are still trying to quantify that impact."

A Seahawk cancellation could also affect about 60 US Army Black Hawks and at least two MH-60Rs ordered by Denmark under the same contract, Healy says. “You cannot cancel one service's part of the contract," he says, adding that Sikorsky is in continuing discussions with the military and that the ultimate impact is unknown.

The army confirms that without the 29 navy aircraft the contract with Sikorsky would not have "sufficient quantities in FY2016 to meet a contract minimum buy requirement". The result, it adds, would be "a contract termination with Sikorsky."

The issue is now largely in the hands of Congress, which must approve the navy's plans.

Aboulafia calls USN's proposal a "game of chicken", and "a plea to Congress to insert the cash." But if Congress doesn't blink, "the navy might well need to either re-instate the contract or pay high cancellation fees," he says.