Airbus Helicopters anticipates strong replacement demand both for military and civilian rotorcraft in the Asia-Pacific region.

Speaking at a Singapore air show media briefing, the company said it has a 22% share of the overall market in the region, and it claims leadership of the civil and parapublic segments. 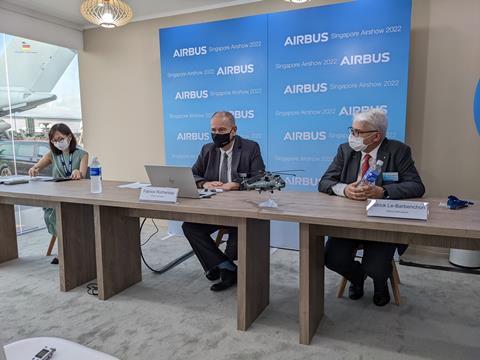 In total, there are 2,150 of the airframer’s rotorcraft in service with 700 operators in 27 countries across the Asia-Pacific. Of the installed fleet, roughly 60% are in pure civilian use, while the balance serve military or parapublic roles.

On the military side, the company sees strong potential for the H135 in the training space, with the light-twin already used by the Australian Defence Force on its Helicopter Aircrew Training System contract with Boeing.

In addition, the heavy-twin H225M remains a strong contender in the region, building on an operator base that includes Indonesia, Singapore and Thailand.

But a notable gap in the manufacturer’s range is the lack of a dedicated attack helicopter following the end of Tiger production. However, Fabrice Rochereau, the company’s head of sales for the Asia-Pacific, says most militaries in the region require a platform that can perform multiple missions.

“Nobody [in the region] expects Russian tanks to come over the border,” he says.

Airbus Helicopters believes its HForce modular weapons system, which has proved most popular on the H145M light-twin, is the ideal solution for cost-conscious customers. Rochereau says there has been regional interest in HForce but declines to offer specifics.

Intriguingly, Patrick Le Barbenchon, operational marketing manager at Airbus Helicopters, also touts the potential of the H175M in the region for operators that do not need the range or payload offered by the H225M.

Airbus Helicopters only launched the H175M last year, principally in pursuit of a looming UK requirement, having previously been prevented due to Chinese workshare on the civil variant of the super-medium-twin. That issue has since been overcome.

The two executives stress that militaries place a premium on reliability, and during the briefing, the company announced the renewal of two support contacts for the Japanese military.

In recent years the market for civil helicopters flown in support of offshore oil and gas operations has been hammered by low energy prices. Although Rochereau points out that rising prices are now offering some support to the sector, the focus remains on the H175 rather than larger rotorcraft.

“The [energy industry] still has a need for modern, economic helicopters and this is where the industry went down to smaller helicopters such as the H175,” he says.