US Marine Corps (USMC) Lieutenant Colonel Robert Guyette added a footnote to aviation history on 3 October 2021, when he became the first pilot to land a fixed-wing aircraft aboard a Japanese carrier since the 1940s.

Guyette, executive officer of USMC squadron VMFA-242, spoke recently with journalists at the Singapore Airshow, where he performed in the aerial display with a Lockheed Martin F-35B; the short take-off and vertical-landing (STOVL) version of the fighter that he used to land aboard JS Izumo. 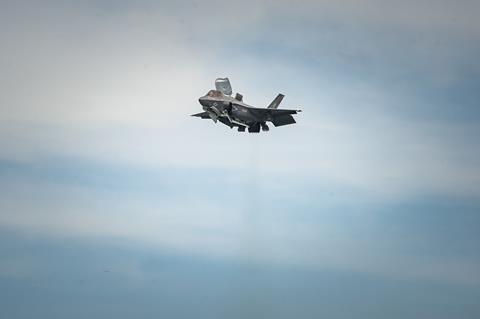 A qualified test pilot, Guyette was the ideal choice for the mission. He has flown over 30 types of aircraft and helicopters. Moreover, VMFA-242 is based in Iwakuni, Japan. His wingman for the mission was Major Nicholas Dylan, a test pilot with the F-35 programme.

Guyette says that years of planning went into the Izumo effort.

“There was a lot of technical evaluation done just to do the one-time event, mostly from our partners at [Naval Air Systems Command] and the Carderock ship facility to determine the ship’s basic launch and recovery envelope,” he says.

Mostly, the project involved working with Japanese defence colleagues, who Guyette says “are very eager to learn all of the intricacies of operating [STOVL] aircraft off the ship”. This involved several trips between Iwakuni and Tokyo to discuss the project, in addition to teleconferences and walkthroughs. 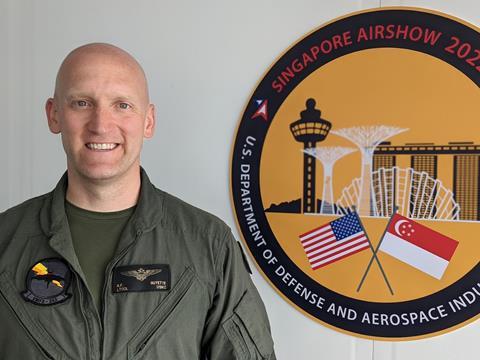 Finally, Guyette conducted simulated landings on Izumo at NAS Patuxent River, Maryland. And though the 3 October landing was historic, video footage of the event made it appear routine.

Guyette says touching down on Izumo felt no different from landing aboard a US vessel. He landed on the ship’s fourth landing position, while Dylan landed on the fifth.

“I would anticipate no additional training for any pilot moving from a [US amphibious ship] or even HMS Queen Elizabeth to the Izumo class,” he says. 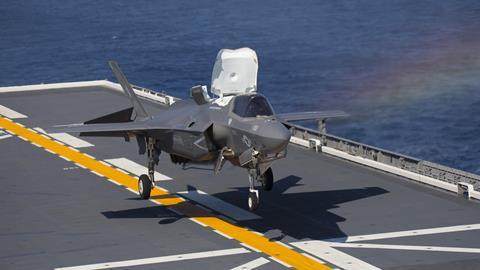 The Japan Maritime Self-Defense Force, for its part, gleaned valuable thermal and acoustic data from the flight. Technically designated “helicopter destroyers”, Izumo and sister vessel JS Kaga are being re-purposed as aircraft carriers, to support the 42 F-35Bs that Tokyo is obtaining.

Guyette also commented on the F-35, having flown all three variants of the aircraft – the conventional take-off and landing F-35A, STOVL F-35B, and carrier-capable F-35C. He was heavily involved in type’s testing programme, serving as lead test pilot for several aspects of the F-35B/C test programme. He was also the first operational pilot qualified for the F-35 in December 2012.

“The handling is identical when going from variant to variant rapidly… if you don’t turn around it’s very difficult to tell the difference [between variants],” he says. “There is some extra hardware in the F-35B, but it gives the Marine Corps a very unique and valid capability.”

The “extra hardware” Guyette refers to is the F-35B’s lift-fan system, which enables vertical landings. Guyette says the F-35B’s STOVL capability allows it, like the Boeing AV-8B Harrier that it is replacing, to be located in forward areas and closer to ground operations. Guyette’s perspective comes from a stint in Afghanistan, where he worked as a forward air controller with small infantry units, with AV-8Bs providing air support.

“While some would say that the Harrier has all this extra equipment that maybe would be a hindrance in other places, the fact they were able to position so close to the battlespace made a believer out of me and the whole concept, so flying the F-35B just reinforces that,” he says.

3 OCT, the #JMSDF conducted verification of takeoff and landing of the USMC F-35B to JS #IZUMO.
The JMSDF continues to steadily carry out the necessary modifications to the IZUMO class to acquire the capability to operate the F-35Bs. pic.twitter.com/0gtPNzrxQC

On the F-35 family more generally, Guyette says that the aircraft is easier to fly than legacy fighter types. In a combat situation, this allows a pilot to focus less on flying the jet and more on the mission. The US military is finding that the relative ease with which F-35 pilots can handle basic aircraft operations means it takes less time to train them for particular mission sets.

Another unique aspect of the F-35 programme Guyette has observed is the speed of updates and improvements.

“One thing that is kind of impressive to me about the F 35 is how rapidly we are iterating not only software, but hardware as well,” he says.

“That’s a reflection of the strength of the alliance and the team, because one country makes an investment or expresses an interest in a capability, and we all benefit from it.”