Boeing is contemplating pitching the F-15EX to New Delhi for one of the country’s long-running fighter procurements - a contest in which its F/A-18E/F is already competing.

The airframer confirms that it has requested US government clearance to offer the twin-engined type for an Indian air force requirement for 110 fighters. 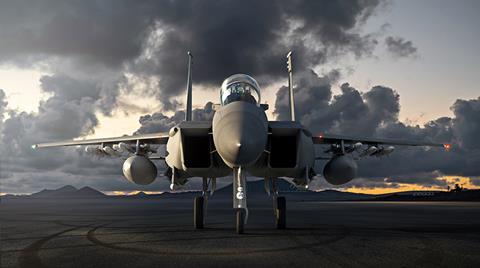 “While awaiting further definition on the Indian air force’s requirements, we have requested a license for the F-15 so that we’re ready to share the full spectrum of potential solutions across our fighter portfolio when appropriate,” says the company.

“We continue to offer the F/A-18 Super Hornet to both the Indian navy and Indian air force, and our F-15 is experiencing a resurgence in interest in the US and around the world.”

Boeing was responding to a query from FlightGlobal after a 9 February meeting with Kelli Seybolt, deputy under secretary of the Air Force for international affairs, who disclosed that Boeing had sought an export licence for India for the F-15EX.

The licence will allow Boeing to discuss the F-15EX with Indian officials in compliance with the USA’s International Traffic in Arms Regulations.

Boeing’s move would see it offer the latest EX variant of the long-running F-15 to New Delhi. Enhancements over previous iterations include a active electronically scanned array radar and improved payload.

The potential entry of the F-15 into the contest is the latest twist in yet another convoluted Indian procurement exercise. After the collapse of its Medium Multi-Role Combat Aircraft (MMRCA) fighter acquisition in 2015, New Delhi rebooted the requirement, initially as an acquisition of a single-engined type, which was later broadened to include twin-engined aircraft.

Likely contenders for the new, poorly-defined requirement already represent a virtual who’s who of combat aircraft. They include the single-engined Lockheed Martin F-16V - dubbed the F-21 for the Indian contest - and Saab Gripen E/F, alongside the twin-engined Dassault Rafale, Eurofighter Typhoon, and Super Hornet. Russia is also likely to offer the RAC MiG-35 and Sukhoi Su-35.

In addition, there is a separate 57-aircraft requirement for the Indian navy, which Boeing is also addressing with the F/A-18E/F.

For the air force offer, competitors have made much of their willingness to offer New Delhi generous industrial participation, in line with prime minister Narendra Modi’s “Make in India” programme.

At the Aero India show in Bangalore in February 2019, Boeing proposed that should the Super Hornet win the air force deal, a “factory of the future” would be established for local production.

“The programme is expected to work with several Indian suppliers to grow a thriving defence aerospace base, which could accelerate other programmes,” said the company. “The facility will create a world-class, highly-trained aerospace workforce.”

Boeing has not indicated whether a similar industrial set-up could be offered for the F-15EX.