A year after it began operations, Pratt & Whitney’s PW1000G-series overhaul line in Singapore is looking to ramp up its output.

Eagle Services Asia (ESA), a joint venture between P&W and Singapore Airlines’ engineering arm, has recently undergone a $85 million refurbishment, which saw the addition of PW1000G-series engines into its range of capabilities, which also include the PW4000 family and the Engine Alliance GP7200. 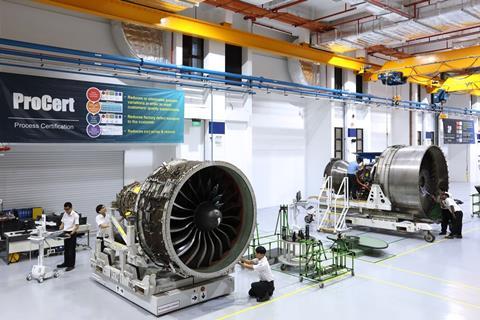 “Following the induction of the first PW1100G variant overhaul…  ESA is on track to more than double the number of GTF engines processed this year following its modernisation,” the engine maker states.

P&W adds that more than 60% of the global PW1000G-series engines are in the Asia-Pacific. “It is therefore a strategic business investment for ESA to support the aftermarket needs of our customers for next generation engines and mature models alike,” says Brendon McWilliam, P&W’s executive director for aftermarket operations in the region.

The Singapore facility is one of the three PW1000G-series engine MRO centres in the Asia-Pacific. Globally, its network spans three continents: North America, Europe and Asia.