UMS Skeldar is in discussions with Asia-Pacific navies to sell its V-200 vertical take-off and landing (VTOL) unmanned air vehicle, but the market is still developing, and integrating such a system onto a warship remains complicated.

David Willems, vice-president of business development, says that navies see the value of an integrated UAV capability, as it can greatly extend a warship’s situational awareness. 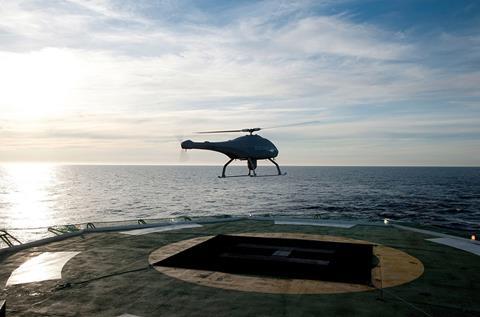 Navies see the benefit of shipborne UAVs, but integration is challenging

But finding the room on a warship to accomodate a UAV remains a challenge, in terms of both its operation and storage.

Aside from the aircraft itself - which may have to compete for space with a manned helicopter - spares and the UAV’s ground control station must also be housed, as well as antennas, which can create electromagnetic interference. Finally, a significant cabling needs to be installed.

For a system like Skeldar, a ship would require three airframes to ensure persistent surveillance, plus six to eight operatives.

However, VTOL UAVs offer significant advantages over fixed-wing assets because launch catapults and recovery systems are not required.