NASA is hopeful its Artemis 1 rocket will be ready for launch on 2 September, though plans remain uncertain following an engine-cooling problem that led the agency to scrub today’s planned launch.

“Friday is definitely in play, we just need a little bit of time to look at the data,” says NASA Artemis mission manager Mike Sarafin. “The team is setting up for a 96 hour recycle… We are preserving the option for Friday”.

Sarafin and other NASA officials add, however, that they are still collecting data related to the cooling problem. The team must analyse that data before committing to a new launch timeline. 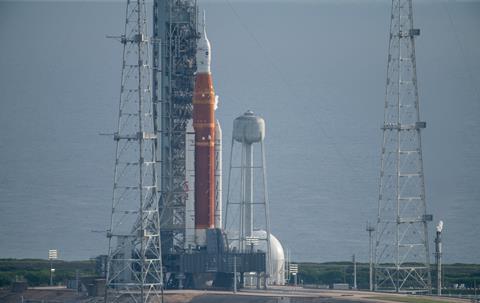 NASA’s Artemis 1 rocket, on launch Pad 39B at Kennedy Space Center in Florida

NASA had planned to launch Artemis 1 the morning of 29 August. But, at the start of the launch window, it called off the launch due to an engine-bleed problem. The next launch opportunity is 2 September.

Specifically, technicians were having trouble cooling one of the four RS-25 engines on Artemis’ core rocket. Those engines, made by Aerojet Rocketdyne, burn cryogenic liquid hydrogen and liquid oxygen. Boeing makes the rocket core.

“We did encounter an issue chilling down engine number three,” says Sarafin. “We need the engine to be at the cryogenically cool temperature as such that, when it starts, its not shocked by all the cold fuel that flows through it.”

To cool the engines, launch controllers “bleed some of the cryogenic propellant to the engines”, according to NASA.

The other three RS-25 engines were also not cooling exactly as expected but were “pretty close”, Sarafin adds. “This points to an engine-bleed issue on the core-stage side, not on the engine side.”

“The combination of not being able to get engine three chilled down, and then the vent valve issue… really caused us to pause today,” he says.