NASA to fly Ingenuity helicopter on Mars within three weeks

NASA is planning for Ingenuity, its Mars helicopter, to fly within three weeks, engineers say on 23 March.

Bob Balaram, Mars Helicopter chief engineer at NASA’s Jet Propulsion Laboratory (JPL), says the first attempt at powered, controlled flight of an aircraft on another planet will be “no earlier than” 8 April.

But, he adds, “things are fluid, and that could be changed by a few days in either direction”. 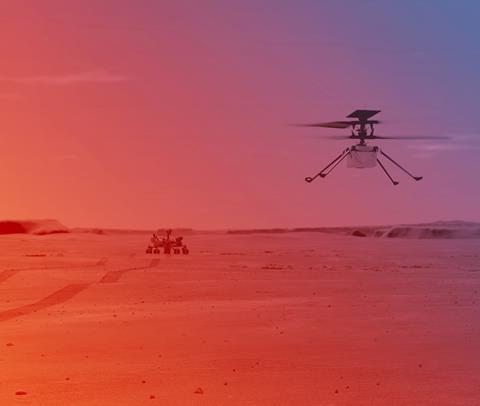 A rendering of Mars helicopter Ingenuity, flying on the red planet

Perseverance, the Mars rover with which Ingenuity travelled to the planet and to which remains attached, arrived on Mars on 18 February, and has been conducting initial tests in the weeks since.

“Every step we have taken since this journey began six years ago has been uncharted territory in the history of aircraft,” Balaram says. “And while getting deployed to the surface will be a big challenge, surviving that first night on Mars alone, without the rover protecting it and keeping it powered, will be an even bigger one.”

Ingenuity, now housed within the “belly” of Perseverance, is a small robotic rotorcraft that weighs about 1.8kg (4lb) and has a rotor diameter of approximately 1.2m (4ft), NASA says.

Perseverance will deploy Ingenuity by dropping it on a 10 x 10m patch of the planet’s surface – an area “chosen for its flatness and lack of obstructions”.

The rover will then retreat, rolling about 60m to an elevated overlook from where it will observe flights. Free of Perseverance, Ingenuity will deploy solar cells, generating electricity to power internal heaters intended to prevent the drone from freezing.

“During Martian daytime, the planet’s surface receives only about half the amount of solar energy that reaches earth during its daytime,” JPL says. Night temperatures on Mars can sink to -90 degrees Celsius (-130 degrees Fahrenheit), “which can freeze and crack unprotected electrical components”.

The first flight will be straightforward but not simple, says chief pilot Havard Grip. Ingenuity will take off and climb to 10ft, turn, hover for 30sec and land. Ingenuity’s flight zone is 90m long, engineers say

“This will be, by far, the most important flight that we plan to do,” Grip says.

The team aims to introduce more complex manoeuvres, and fly Ingenuity to 16ft altitude, during a flight-test campaign planned to last 31 days.

“We are focusing on demonstrating [the craft’s] basic capability to hover, then traversing a longer distance down [the] flight zone,” Grip says.

NASA remains unsure how the craft will be affected by the red planet’s environment, Balaran says. Mars has about one-third of earth’s gravity but just 1% of its atmospheric density at the surface. In addition, winds can be unpredictable, he adds. A weather team will help determine if and when conditions allow for test flights.

“The biggest challenge is flying the thin atmosphere of Mars, which has its own dynamics and winds,” Balaran says. While the craft had been tested in a special chamber on earth prior to rocketing to Mars, actual atmospheric conditions will vary.

If Ingenuity were to topple over, its blades would likely be badly damaged, meaning an early end to the programme, he adds.

The rover and helicopter were launched from earth on 30 July 2020.