NH Industries (NHI) is continuing to talk with existing customers of its NH90 troop transport helicopter (TTH) about the possible launch of a dedicated special forces variant.

Initially proposed as a joint development for Australia and France, the idea has drawn interest from Germany, Italy and New Zealand, said Vincent Dubrule, president of the NHI consortium, speaking at an event in Germany on 8 December.

“It is under definition but it is not yet launched,” he says. “I don’t know when, because it depends on customer funding, but I hope it will be launched in the next couple of years and then implemented.”

All five nations recently met to discuss the proposal, he says, “and there is starting to be a framework around that”, although he notes there is no guarantee that all will participate in any development effort.

Under the plans initially envisaged by Australia and France, the special forces model would have a trapdoor for fast roping and enlarged rear windows to allow positioning of a machine gun while maintaining access to the cabin doors.

Any modifications would be available as either line- or retrofit options, he adds. 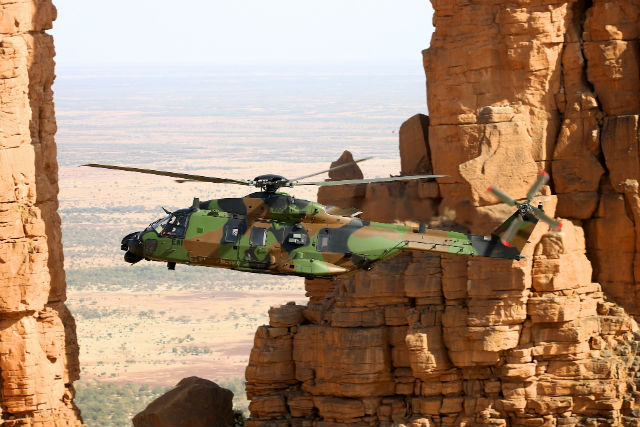 Meanwhile, the programme will celebrate its 300th delivery next week with the handover of a TTH to the Spanish army. It will deliver a total of 38 aircraft this year.

Current backlog for the programme stands at 515 helicopters and Dubrule is hopeful that additional orders can be secured to push the total towards 600 units.

Orders could come from existing NH90 operators France and Germany, which hold more than 40 options between them, and potential new customers Egypt and Qatar.

In April 2014 Doha selected both variants for a combined 22-helicopter deal, but has yet to place a firm order; discussions with the Gulf state are continuing, says Dubrule, but he offers no timeline for their conclusion.

In addition, talks with Cairo are at an early stage, he says, with no indication of either quantity or delivery schedule.

“They have bought [Mistral-class amphibious assault] ships and they need something to put on them,” he adds.