Demand for air cargo fell in March, according to data released by IATA on 3 May, as factors including China’s ‘zero-Covid’ policies and the Russia-Ukraine war weighed on demand and threatened to become longer-term hindrances.

The drop in demand comes after air freight performed strongly in 2021, and reflects a significant shift in fortunes between industry sectors as the passenger side of airline operations finally reports widespread recovery momentum.

“Peace in Ukraine and a shift in China’s Covid-19 policy would do much to ease the industry’s headwinds,” says IATA director general Willie Walsh. “As neither appears likely in the short term, we can expect growing challenges for air cargo just as passenger markets are accelerating their recovery.”

While capacity was up 1.2% on the same basis, the airline body notes that this is a significant decline from the year-on-year increase seen in February, with Asia and Europe experiencing the largest falls.

Explaining the changed operating picture, Walsh points out that air cargo “mirrors global economic developments” and that March saw the trading environment “take a turn for the worse”.

In the case of Europe, several airlines based in Russia and Ukraine were “key cargo players”, IATA points out, while sanctions against Russia have led to disruptions in manufacturing output.

And global supply-chain disruptions have only been made worse by war in Europe and fresh lockdowns in China.

Meanwhile, the global trade in goods has continued to fall in 2022, IATA notes, with China’s draconian Covid-19 approach contributing to slower economic growth in that key economy.

Inflation is also a negative factor, with IATA citing consumer price inflation in G7 countries at 6.3% year on year in February 2022 – the highest level seen since 1982.

Moreover, “new export orders, a leading indicator of cargo demand, are now shrinking in all markets except the US”, IATA states.

“The combination of war in Ukraine and the spread of the Omicron variant in Asia have led to rising energy costs, exacerbated supply chain disruptions, and fed inflationary pressure,” Walsh says. “As a result, compared to a year ago, there are fewer goods being shipped – including by air.”

Broken down by region, Asia-Pacific airlines saw cargo volumes some 5.1% lower year on year in March on capacity down 6.4%, as Covid-19 policies in the key China and Hong Kong markets impacted performance.

The demand fall was even greater among European carriers, who reported an 11.1% decrease in CTKs on a 4.9% drop in capacity year on year, as intra-European services were particularly hard hit by the war in Ukraine. Labour shortages were also an issue, IATA notes, alongside lower manufacturing activity in Asia.

North American carriers reported a 0.7% decrease in cargo volumes for the month on capacity some 6.7% higher, as demand for services to and from Asia declined.

The Middle East failed to see any uptick in demand for air cargo that might have resulted from businesses rerouting freight to avoid Ukraine and Russia, instead reporting a 9.7% year-on-year decrease in demand in March, on capacity up 5.3%. 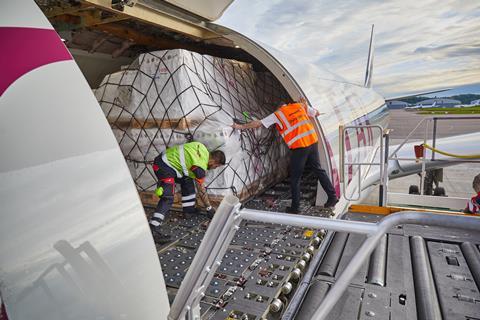 In the smallest markets, the end of bankruptcy protection among key carriers in Latin America contributed to a 22.1% increase in cargo volumes in March, on capacity some 34.9% higher.

African airlines saw cargo volumes increase by 3.1% on capacity up 8.7%.