Airline industry might burn through $95bn in cash this year: IATA

The global airline industry might continue to burn cash into 2022 amid uncertainty over when governments will release travel restrictions, according to a range of scenarios presented by IATA.

“We are concerned that it’s going to take much longer for the industry to stop burning through cash,” says the airline body’s chief economist Brian Pearce during a briefing today. This will have significant financial consequences for many carriers, he warns, raising ”questions about survivability”.

IATA now doubts that airlines will start to generate cash in the fourth quarter of 2021, as it had forecast in December, Pearce says.

It is therefore considering three scenarios for how the year will play out – including one where traffic is lower this year than in 2020 and cash-burn nears $100 billion.

Its December 2020 forecast was that passenger traffic would reach 51% of 2019 levels this year, enabling the industry to turn cash-positive by the fourth quarter, having burnt through $48 billion during the year.

IATA is increasingly concerned that a scenario is playing out where a slower release of restrictions means traffic only reaches 38% of 2019 levels – a marginal uptick on the 2020 performance. In that case, cash-burn would continue into 2022, with $75 billion lost over the full year.

Under a worse scenario, which IATA is modelling, traffic would only reach 33% of 2019 levels this year, meaning cash-burn of $95 billion for the full year and a return to a cash-positive position further into 2022. Passenger traffic in 2020 was 34% of the 2019 levels. 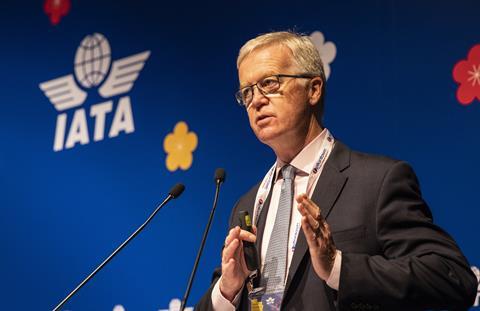 Pearce says the short-term outlook is worse than previously expected

In considering these scenarios, Pearce cites “a great deal of uncertainty about whether governments will relax travel restrictions”, and notes that this “short-term problem” is a result of coronavirus being “even more difficult” to control than IATA expected when it released its December forecast.

IATA’s assumption that travel restrictions would be released as soon as countries had vaccinated their most vulnerable populations is also being challenged by developments.

Amid this uncertainty, bookings for domestic flights have started to deteriorate in recent weeks, Pearce explains, having held up well during the second half of 2020. At the same time, international bookings continue to flat-line at a low level.

More positively, the potential exists for for a strong rebound, he says, particularly in developed economies where vaccination programmes are more advanced.

Ultimately, however, “the first half of this year is looking quite a bit weaker than when we issued our forecasts in December”, Pearce states.

Looking further into the year, towards the crucial July-August period – when airline profitability often offsets poorer financial performance in other months – Pearce notes with concern that forward bookings for those months were down 78% in mid-February versus the same point in 2019.

“The cliche that it’s always darker before dawn – that seems fitting for today’s messages,” says IATA director general Alexandre de Juniac during the same briefing. Many airlines will not survive “without additional relief from government”, he adds.

Others will end the year with much higher levels of indebtedness than expected only weeks ago, Pearce adds.

IATA notes that under all scenarios, it still believes the industry will return to 2019 levels of passenger traffic in the 2023-2024 timeframe, because the same pent-up demand for passenger travel exists in all cases.

IATA has estimated that airlines burnt through $77 billion in cash during the second half of 2020 alone.