American Airlines and zero-emissions propulsion specialist ZeroAvia have teamed up on a project to develop an engine for regional jet aircraft.

The two companies said on 3 August that as part of the deal, American will have the option to order ”up to 100 engines” from the ZeroAvia hydrogen-electric powertrain development programme. 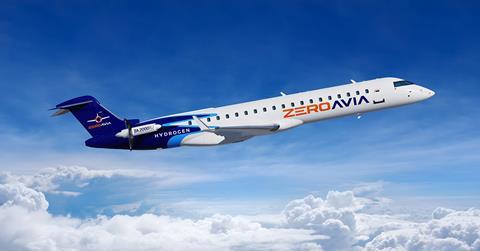 “Our investment in ZeroAvia’s emerging hydrogen-electric engine technology has the potential to play a key role in the future of sustainable aviation,” says American’s chief financial officer Derek Kerr. “We are excited to contribute to this industry development and look forward to exploring how these engines can support the future of our airline.”

ZeroAvia says it’s working to achieve certain type certifications of its innovative propulsion technology that will pave the way for the ZA2000-RJ engines to be incorporated into regional jets “as early as the late 2020s”.

The companies did not quantify the investment.

“Having support from the world’s largest airline is a strong indication of the progress we’re making on the development of hydrogen-electric, zero-emission flight,” says ZeroAvia founder and chief executive Val Miftakhov. “We are focused on delivering sustainable travel, and are delighted that American, a visionary leader in the industry, sees ZeroAvia as a part of the future of aviation.”

The ZA2000 powertrain, which the company has said can deliver up to 2,500MW, is intended for 40- to 90-seat aircraft operating across 500nm of range. It will complement the 600kW powertrain, aimed at nine- to 19-seat aircraft, which is slated to enter service in 2024.