TAP Air Portugal posted a net loss of €1.6 billion ($1.7 billion) for 2021, including €1 billion of one-off costs largely related to the closure of its Brazilian maintenance unit.

The Portuguese carrier notes the net loss was better than the €1.75 billion projected in its restructuring plan and that a stronger recovery in the second half offset first-half operating losses. This enabled it to end the year with a positive EBITDA of €11.7 million. 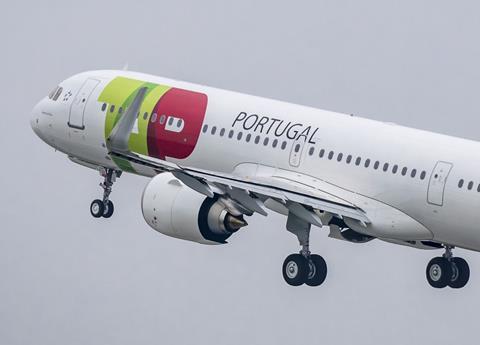 TAP’s operating profit was achieved on passenger numbers climbing a quarter to over 5.8 million. This though remains at just 35% of pre-crisis levels. Revenues for the year increased 31% to €1.4 billion.

The carrier’s net loss of €1.6 billion includes just over €1 billion in one-off costs, mostly relating to the closure of TAP ME Brazil. Divestment of the MRO unit was a condition of European Commission support for €2.6 billion in restructuring aid granted to TAP in December. TAP in January said it was closing the unit, having acquired the former Varig engineering business in 2005.

The net loss also includes a €176 million negative exchange rate impact related to the depreciation of the Euro against the US dollar.

TAP ended the year with improved liquidity of €813 million in cash, aided by capital increases of €462 million and €536 million from the Covid damage compensation aid and restructuring aid schemes respectively.

The Star Alliance carrier had a fleet of 94 aircraft in 2021 – two less than in 2020. That reflects the phase-out of five Airbus A320-family and two A330 aircraft, which were replaced by five A320neo family jets.