COP26 aviation declaration should be positive for SAF momentum

A declaration signed by the newly created International Aviation Climate Ambition Coalition at COP26 on 10 November appears to be positive for the airline industry, even if it is light on detail.

Crucially, the focus of the declaration is decarbonising air travel – rather than restricting it.

Among the 14 signatories are representatives of countries with significant commercial aviation markets, including Canada, France, Italy, Japan, South Korea, the Netherlands, Spain, Turkey, the UK and the USA.

They have agreed to work together, “both through ICAO and other complementary co-operative initiatives”, to implement “ambitious actions to reduce aviation CO2 emissions at a rate consistent with efforts to limit the global average temperature increase to 1.5°C”.

Among a list of action points, the countries will promote “the development and deployment, through international and national measures, of sustainable aviation fuels that reduce lifecycle emissions and contribute to the achievement of the UN Sustainable Development Goals”. 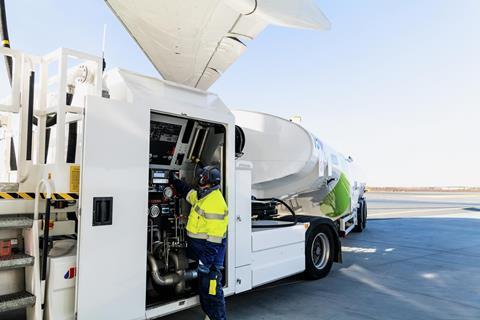 Sustainable aviation fuel is at the centre of sustainability plans

They will also promote the “development and deployment” of low- and zero-carbon aircraft technologies.

Another key part of the agreement is ICAO’s CORSIA carbon-offsetting scheme for international aviation, of which the partners will seek to ensure “maximum effectiveness”.

The latter point – and offsetting as a concept – is a controversial one. Speaking at an event running alongside COP26 this week, United Airlines chief executive Scott Kirby said that “offsets really do drive me crazy, because most of what I call traditional carbon offsets are either not real, and/or they are not scaleable”.

Offsetting aside, however, the narrative is becoming a clearer one.

With the consensus view being that sustainable aviation fuel (SAF) will do much of the heavy-lifting to get the airline industry to net-zero CO2 emissions by 2050, the discussion is now about making that happen.

As IATA director general Willie Walsh told the Middle Eastern airline industry at the AACO gathering in Doha on 11 November, the vital next step is for policy-makers to build momentum around SAF: “We don’t have electric cars because drivers built them. The energy transition for road transport is happening because governments created a policy framework that supported innovation. The market reacted by developing cost-efficient electrification solutions that appealed to consumers.”

The industry can therefore take heart that the signatories to the new aviation coalition – which will meet regularly to discuss progress – recognise their part in that process.

Airlines are ultimately aware that government support for decarbonising aviation matters practically and in the public-relations challenges ahead.

In a stark reminder of the strength of feeling on aviation’s journey to net-zero, Doug Parr, chief scientist for Greenpeace UK, said in response to the declaration: “This announcement is full of scams like offsetting, and excessive optimism on so-called ‘sustainable aviation fuels’ and future aircraft designs.”