The European Commission has approved €136.9 million ($166 million) in state aid for French leisure carrier Corsair, paving the way for the struggling airline’s sale.

The support is split between €106.7 million of restructuring aid and €30.2 million in government compensation for the impact of coronavirus. The majority of the former will be delivered via loans, although around €27 million comes from tax deferrals and credits.

The aid is part of a €300 million restructuring of the airline announced in late November, under which shareholders Intro Aviation and TUI Group will sell their interests to a consortium led by Eric Kourry and Patrick Vial-Collet.

The consortium – which features other stakeholders from the tourism and hotel sectors in the French overseas territories – will take a 100% stake in the carrier once local court approval for the restructuring is received. Corsair expects that milestone to be reached by the end of this year.

Kourry would bring airline industry experience to Corsair as the chairman of Guyane Aero Invest, which is the holding company of Guadeloupe-based Air Antilles and French Guiana-based Air Guyane, while Vial-collet is a hotelier and president of the Chamber of Commerce of Guadeloupe. 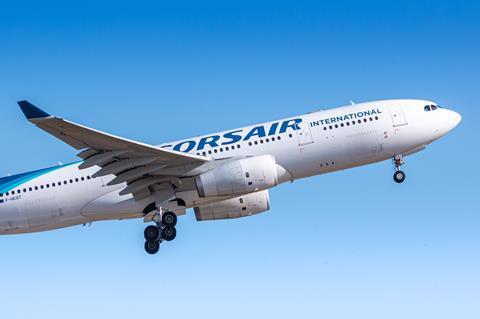 “Corsair was in financial difficulties, which were aggravated by the coronavirus outbreak,” states the European Commission’s executive vice-president with responsibility for competition policy Margrethe Vestager on 11 December. “The restructuring aid will allow Corsair to partially finance the restructuring plan that should bring the company back to viability and will help avoiding disruptions for passengers in the outermost territories of the European Union.”

The Commission notes that beyond the state aid, “the rest of the restructuring costs will be covered by own contribution coming from a current shareholder (TUI), future shareholders (a consortium of investors active mainly in tourism sector) and other free resources (including the sale of three aircraft)”.

German turnaround specialist Intro said in late September that it wished to sell its 53% stake in Corsair, stating that its was “not willing to provide” the additional funding required by the airline.

Beyond the financial and ownership elements, Corsair’s restructuring plan includes reduced staff costs, a concentration of activities on its core routes to French overseas regions, and changes to the carrier’s fleet.

The network element will see the airline strengthen existing services to Martinique, Guadeloupe, Reunion, Mauritius, Abidjan and Montreal, Corsair states. It also recently reinstated services to Mayotte and plans “an expansion of the network… with the opening of new destinations” focused on French overseas territories.

Corsair adds that the new ownership structure will allow it to continue with its fleet modernisation plan, under which it has orders in place for five Airbus A330-900 aircraft. Three of the A330neos will join Corsair’s fleet in April, May and June 2021, respectively, with the fourth due for delivery in December 2021 and the fifth in June 2022, the airline states.

In July, Corsair announced that its three Boeing 747-400s had been sold to the aviation division of a US-based transport and energy sector investor Fortress Transportation & Infrastructure Investors, leaving the carrier with four A330-300s and one A330-200.

Intro acquired a 53% shareholding in Corsair from TUI in 2019. The airline’s staff took a 20% stake, while TUI retained the remainder.