Intro managing partner Peter Oncken, who also serves as Corsair’s chairman, tells Cirium that, amid the Covid-19 crisis, the airline requires additional funding which “neither [fellow shareholder] TUI nor Intro are willing to provide”.

Stressing that he speaks only on Intro’s behalf, he says: “As the French government is basically willing to help if shareholders make a contribution… I have declared that a sale to interested parties who are willing to invest may well be possible.” 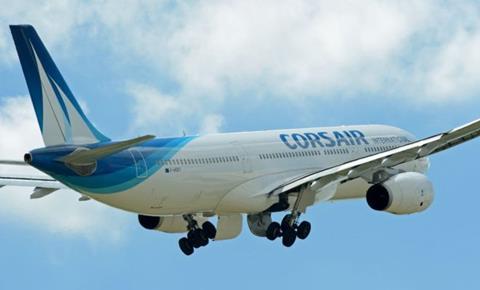 He adds that “promising talks are currently in progress” and that Corsair “will probably have a new owner soon, and we will withdraw”.

German turnaround specialist Intro acquired a 53% shareholding in Corsair from TUI in 2019. The airline’s staff took a 20% stake, while TUI retained the remainder.

Intro and TUI each committed to maintaining its shareholdings for a minimum of three years.

Oncken expresses regret about Intro’s prospective withdrawal from the Paris-based airline, saying: “It’s a real shame because we were on track until the outbreak of the crisis and made excellent progress with the restructuring.

“I actually set out to develop the company over the long term and I was really looking forward to the years to come.”

Based at Paris Orly, Corsair specialises in long-haul flights to destinations in West Africa, the Caribbean, the Indian Ocean and North America.

The A330neos – previously scheduled for arrival by 2021 – were to be leased from Avolon and MG Aviation. Oncken says delivery of the Trent 9000-powered aircraft has been delayed by a few months.

He sees no opportunity for airline equity investments over the coming years. “The current situation is simply too volatile,” he says.

Instead, Intro intends to concentrate on airline consulting projects. The Nuremberg-based company – which Oncken acquired from founder Hans Rudolf Wohrl in 2016 – has been engaged by an investor group interested in acquiring stakes in multiple African carriers, he says.