Etihad Airways claims to have cut CO2 emissions by 72% on a London-Abu Dhabi flight using a combination of initiatives that highlighted some of the challenges ahead if the widespread adoption of sustainable aviation fuels (SAFs) in particular is to become a reality.

The special 23 October flight was part of Etihad’s Greenliner programme – a two-year partnership between the airline and Boeing that uses the former’s 787 fleet as a testbed for sustainability improvements in partnership with other organisations.

Overall, the 787-10-operated service reduced CO2 emissions by 39,000kg and fuel burn by 1,800kg, Etihad says, compared with an equivalent 2019 flight. It also points out, however, that flight number EY20 brought into focus some of the current roadblocks to widespread SAF use, which most industry roadmaps say is crucial if the airline industry is to achieve net-zero CO2 emissions by 2050. 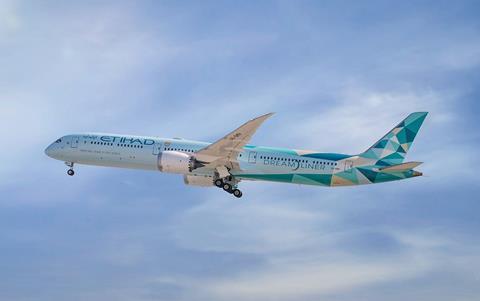 “It is well known that SAFs are a credible alternative to current fossil fuels, however they are currently very expensive, and difficult to source and load on to the aircraft,” says Etihad Aviation Group’s chief operating officer Mohammad Al Bulooki. “EY20 was a dramatic example of those constraints wherein Etihad was unable to directly load the 38% SAF blend into the aircraft given inherent infrastructure constraints at Heathrow airport.

“Instead, the SAF purchased by Etihad was loaded into the fuel hydrant system, which serves all airport users.”

That meant the flight did not directly receive the benefit of the 38% SAF blend intended for it.

Etihad suggests that the aviation industry and governments “must work together to address these issues through the funding of the research and development of SAFs and other parts of the planning and operating of flights”.

It further notes that its greatest learning point from the two-year Greenliner programme “has been that even when solutions are available, they are not easily deployed on a regular basis due to constraints throughout the entire aviation ecosystem”.

Etihad says it intends to work with industry partners to overcome that challenge.

Furthermore, passengers were encouraged to keep luggage weight to a minimum and engines were cleaned pre-flight.

Contrail-reduction measures were also adopted, in what Etihad claims was a first for a commercial service.

Working with UK-based SATAVIA, Etihad identified potential areas of ice super-saturated regions in the atmosphere where harmful contrails are likely to form, and the flight route was adjusted to avoid those areas. Etihad says that based on the original and adjusted flightplan, the strategy avoided the production of approximately 64 tonnes of CO2, with a fuel penalty of only 100kg, or 0.48 tonnes CO2.

Overall, Al Bulooki describes the efficiency savings of the flight as “noteworthy”.

“When Etihad committed to achieve net zero, it was acknowledged that it was only possible if the airline worked collaboratively and positively with our industry partners,” he states. “That is exactly what Etihad has done with the sustainable flight. Of equal importance, Etihad, Boeing and its partners – airports, ANSPs and suppliers – used the flight to learn where further improvements could be made.”

“Each of these partners played their own, significant role in the step we took today,” the airline states.

Its comments chime with those made by IATA director general Willie Walsh during the association’s AGM in early October, when he said that “the cost and effort of breaking our industry’s dependence on fossil fuels cannot all fall on the backs of airlines alone”.