Gulf carrier Etihad Airways is to redeploy some of its Boeing 787-10s as passenger freighters following the temporary suspension of scheduled services in the United Arab Emirates, as it seeks to meet a related spike in air cargo demand.

Etihad – along with Dubai-based Emirates – has today suspend passenger flights in line with guidance from the UAE authorities that curbs air travel for two weeks as part of measures to counter the coronavirus pandemic. 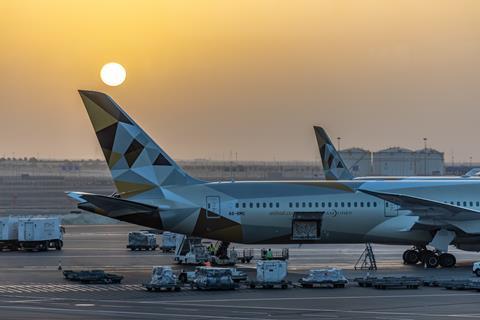 But global demand for freighters has jumped as cargo capacity previously carried in the bellyhold of passenger aircraft has been taken out of the market as a result of the grounding of passenger services.

“They [Etihad Cargo’s freighters] are sold out months and months in the future,” Etihad Aviation Group chief executive Tony Douglas tells FlightGlobal. “Demand for air freight has gone through the roof. It’s a global phenomenon. So much bellyhold capacity has come out of the system.”

Around three-quarters of Etihad’s cargo capacity is flown in the bellyhold of its passenger aircraft, with the rest transported by the operator’s Boeing 777-200 freighters – of which the carrier has six in service, according to Cirium fleets data.

Etihad has decided to complement those 777 freighters with 787-10 aircraft. The Dreamliners will operate 34 weekly flights, serving 10 markets initially. Each aircraft will provide capacity for 12 lower-deck pallets and four containers, carrying up to 45 tons of payload.

The passenger freighter network will introduce capacity into India, Thailand, Singapore, Philippines, Indonesia, South Korea and other destinations where borders remain open for cargo. Additionally, the current freighter schedule will be enhanced by additional flights into Riyadh, London, Hong Kong and Shanghai.

The managing director of cargo and logistics at Etihad Aviation Group, Abdulla Mohamed Shadid, says: “In the current environment it is essential these trade lanes remain open, and with the addition of this capacity we are able to serve constrained markets that face decreased passenger freight operations, offering a strategic cargo lifeline, and supporting the continuity of the global trade ecosystem.”

Speaking during a media briefing today, IATA’s global head of cargo Glyn Hughes highlighted “record levels” of freighter demand amid a fall in passenger flights that has reduced global air cargo capacity by around 30%.

IATA says that while there has been a sharp decline in air cargo demand from sectors such as automotive manufacturing, this has been partially offset by an increase in shipments of medical equipment. Yet the reduction in passenger flights is “taking a huge amount of cargo capacity offline”, notes Hughes.