The Destination 2050 – A Route to Net Zero European Aviation report outlines commitments that the region’s airlines, airports, aerospace manufacturers and air navigation service providers are willing to make towards that goal.

“Crucially, we now need policy-makers and regulators to align with us,” stated ACI Europe director general Olivier Jankovic during a briefing today.

While the recommendations focus on the EU, the UK and the European Free Trade Area, Thomas Reynaert, the managing director of Airlines for Europe (A4E), points out that there would be many benefits – economic and otherwise – to Europe taking a global lead on the issue. 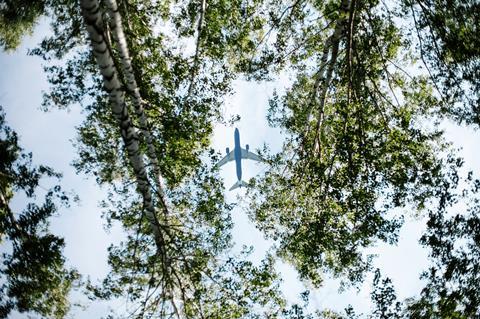 The industry recognises an urgent need to address its environmental footprint

The implementation of the plan would also better align the sector with broader environmental goals such as those under the Paris Agreement, according to Montserrat Barriga, director general of the European Regions Airline Association (ERA), and with the expectations of politicians and consumers around the industry’s commitment to addressing its environmental footprint.

Indeed, presenting the key findings of the report at the briefing, speakers were keen to stress that even amid the devastating impact of the Covid-19 crisis, the aviation industry recognises the urgent need to act on sustainability.

The industry faces a particular challenge, Reynaert notes, in that it has no readily available alternative to burning aviation fuel.

The associations are therefore keen for their recommendations to be swiftly adopted by the European Commission and national governments under an “EU Pact for Sustainable Aviation”, which they say should be agreed by the end of 2021.

That would ensure the necessary support – including financial input – and policy frameworks are in place to implement the plan.

The report outlines several areas that would contribute to the net-zero target, taking into account an assumption that European air passenger numbers grow on average by 1.4% a year between 2018 and 2050. 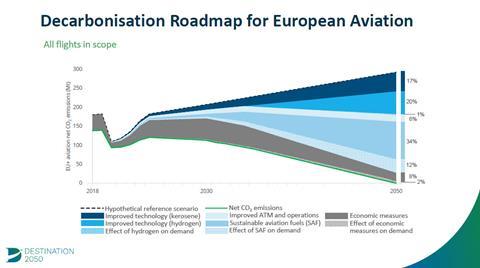 Improvements in aircraft and engine technologies could achieve a 37% reduction in the CO2 emissions projected for 2050 based on the aforementioned traffic scenario, it suggests.

By 2035, the report says that “highly efficient” propulsion systems could deliver 30% savings in terms of fuel consumption. At the same time, hydrogen-powered aircraft could begin to operate short-range, intra-European flights, theoretically cutting CO2 emissions by 100% versus services operated with current-generation technology.

Hybrid-electric rotorcraft and regional aircraft would also be contributing to emissions reductions by entering service between 2030 and 2035.

EU and national governments would support funding for research into, and the promotion of, carbon-removal technologies, the report says.

Sustainable aviation fuels (SAF) are another crucial factor, with the report suggesting they could lead to an emissions reduction of 34% in 2050.

SAF could account for up to 83% of total fuel useage by 2050, according to the report. It notes, however, the challenges around achieving that scale of production and the current high cost of the fuel.

Economic measures – including emissions offset schemes such as the EU ETS and ICAO’s CORSIA – could achieve a reduction of 8%.

Improvements in air traffic management and aircraft operations could achieve a reduction of 6%, with the implementation of the Single European Sky initiative a key pillar of that.

The impact of the measures would have a negative affect on demand for air travel, the report acknowledges, including through higher ticket prices. In its own right, that lower demand contributes to the CO2 reduction target.

“The ball is now with the EU and the member states must now play their role,” Jankovic states. “We have no time to lose. The challenge is daunting.”

The five European aviation associations behind the report are A4E, ACI Europe, the ERA, the Aerospace and Defence Industries Association of Europe, and the Civil Air Navigation Services Organisation.

A4E and other associations have, in recent years, been seeking to take the initiative on sustainability, rather than leaving it to governments and regulators who have sometimes shown a preference for measures such as taxes on air fares.

Responding to the Destination 2050 report, the European Commission says it ”strongly welcomes the fact that major associations representing the European aviation value chain have come together to jointly produce this report.

“Once the sector has started recovering from the current crisis, decarbonising aviation will be the new societal license to grow for European aviation. We are committed to contribute to this by taking supportive measures at EU level and promote progress also internationally.”