Virgin Atlantic faces “key decision points” in the next two to three years regarding the growth of its fleet, as it awaits a UK government decision on how slots will be allocated at an expanded Heathrow airport.

“We know we have the options to extend the fleet, and we have key decision points over the next two or three years to achieve that,” the carrier’s executive vice-president of operations Philip Maher told FlightGlobal on 18 September during an Airbus A350-1000 “celebration flight” to mark the type’s entry into service with the UK operator.

Maher also confirms that Flybe is a key part of Virgin Atlantic’s plans for domestic and intra-European services, adding that a decision is still to be made on how that operation will be branded.

He was commenting on the day that Virgin Atlantic unveiled ambitions for a massive expansion of its services from Heathrow airport – a plan that hinges on a UK government decision regarding the allocation of the extra capacity created by a proposed third runway. 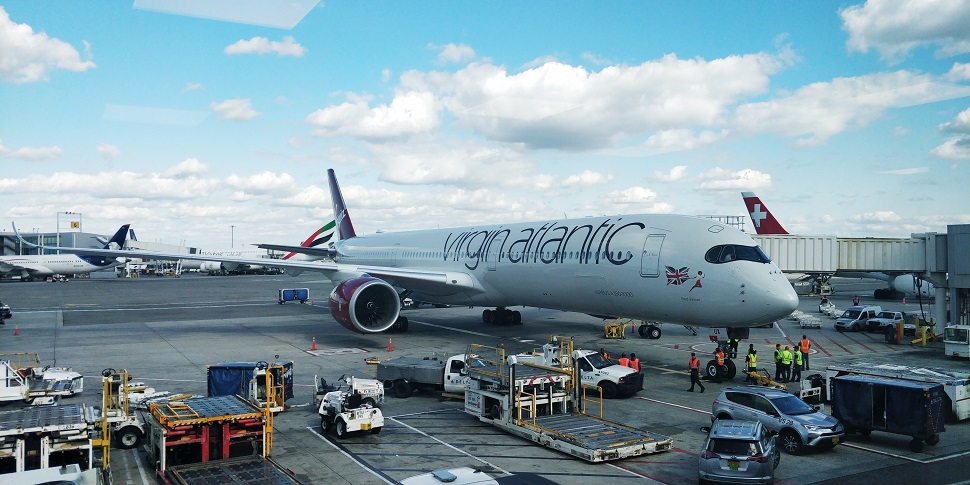 Virgin Atlantic is seeking to serve 103 destinations – comprising domestic, European and long-haul services – when the new runway goes into operation, up from the 19 points it plans to serve in 2020, all of which are long-haul. Of the 84 new destinations planned, 12 are domestic, 37 are European and 35 are international.

Noting he is “absolutely” confident that Virgin Atlantic is set up to handle the rapid expansion required should the slot decision work in the airline’s favour, Maher says there are “huge options on whether we expand our 787 fleet” and that the airline could extend the leases on the Dreamliners it already has in service.

“We know we can deliver new services and new aircraft,” Maher states. “We just introduced four [A330-200s] last year in rapid time, and that included a cabin refresh. We’re now introducing the A350-1000 seamlessly. We’re about to introduce the the A330-900neo, again without a hitch.”

Regarding Virgin Atlantic’s domestic and intra-European ambitions, Maher stays that “Flybe would be a key connector for us into Manchester and Heathrow”, adding that the carrier would “use Flybe to expand our regional footprint into Europe and feed that traffic back into the UK”.

While Maher insists Virgin Atlantic’s “aspirations can be met through organic growth”, he also suggests that should “other opportunities come along” to grow via a further acquisition, the operator “wouldn’t switch one [option] off versus another”.

Asked why, amid the clamour for slots at the UK’s busiest airport, Virgin Atlantic currently leases some of its Heathrow slots to other operators, Maher suggests that “we didn’t have the markets and the right airplanes” when those decisions were made. “It was a timing issue,” he explains, noting that the carrier has now transitioned into a period of growth, having moderated its capacity for several years.

Maher adds that he is unsure when the UK government will make its decision on slot-allocation at Heathrow, given that the process has only just begun.

“What we really need to do now is convince the government that there needs to be a level playing field at Heathrow,” he says. “We need to ensure that BA and IAG have an effective competitor in place.”

Maher also says that the carrier is still working on its plan for how Connect Airways – through which Virgin Atlantic is co-owner of Flybe, Stobart Air and lessor Propius – will be marketed to passengers, noting that it is considering “how that brand would work in terms of the customer proposition… whether that’s ‘Virgin something’ or another brand”.

Flybe has 71 aircraft in service, Cirium data shows, of which 54 are De Havilland Canada Dash 8s.